12 Most Beautiful Lakes in Canada

Lakes in Canada, particularly British Columbia and Alberta, are undeniably gorgeous. That’s not to say their eastern sisters are ugly – they’re not; they are pretty in their own way. But, you must admit, the western lakes, with their turquoise water surrounded by stunning mountain peaks, are a special treat for the eyes. If you’re looking for good swimming or motor-boating, the eastern Canadian lakes are just the ticket. However, if you want to canoe over tranquil waters in a wilderness setting, heed the words of Horace Greeley: “Go west.” 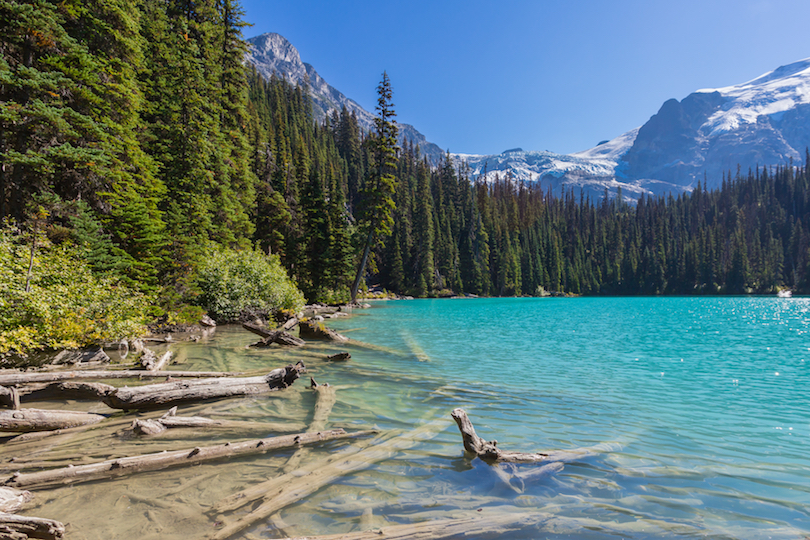 Joffre Lakes are noted for their stunning beauty. The Lower, Middle and Upper Joffre Lakes were created by glacial action; the beautiful turquoise green reflects this today. Located 35 km (22 miles) north of Penticton, British Columbia, the lakes present a picture of tranquility. Getting to them isn’t easy, however; you must be prepared to hike in. It’s a relatively easy one-third mile walk from the parking lot to Lower Joffre, but after that, the terrain becomes rocky and steep, making the three-mile hike to the upper lake challenging. 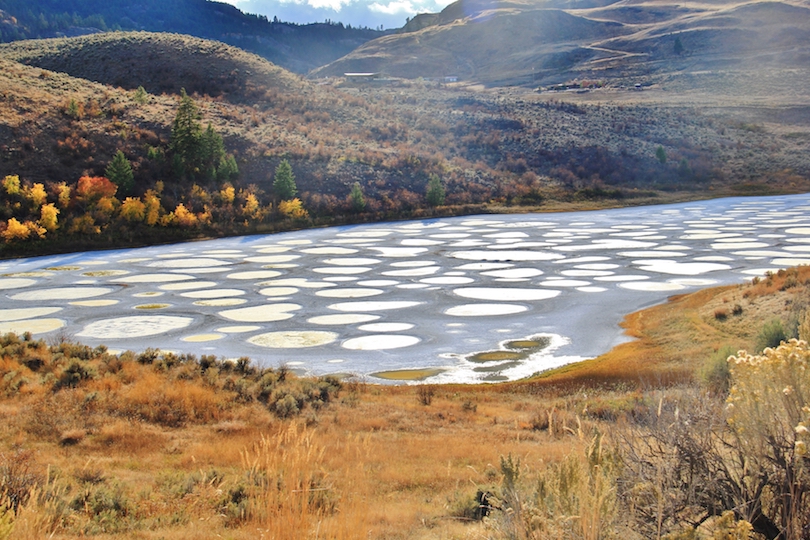 Summer is a good time to visit Spotted Lake near Osoyoos in south-central British Columbia. That’s because this lake isn’t your normal colored lake. It’s colored all right, but not from the water. The lake is filled with a variety of minerals. When the water evaporates during the summer, it leaves behind a lake bottom of colorful mineral hues. The minerals leave “spots” on the lake that harden in the summer heat. Unfortunately, you can’t walk on the lake; you must view it from behind a fence. 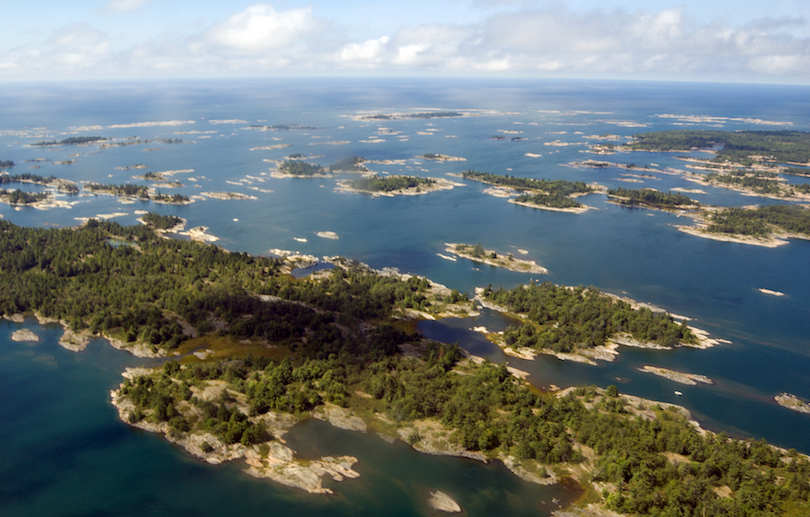 Dividing Canada and the United States is Lake Huron, one of the largest freshwater lakes in the world. Not only that, but it’s home to the largest freshwater island, Manitoulin, in the world. Plus, Georgian and Saginaw bays, the biggest in the five Great Lakes, are so big they’re sometimes mistaken for lakes themselves. Trees outnumber people along the lake, which has seen many shipwrecks over the centuries. The most important wreck sites are preserves. The lake is named for the Huron Indians. 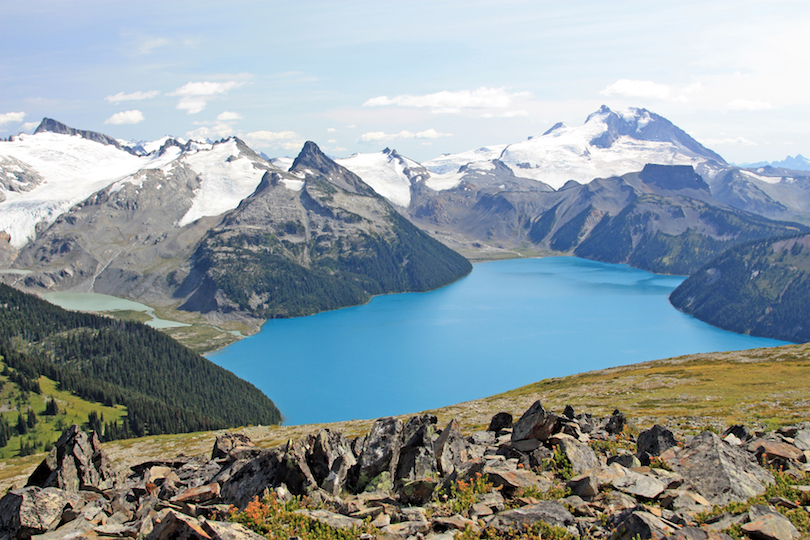 Located in a provincial park with the same name, Garibaldi Lake is a scenic personified, surrounded as it is by snow-capped mountains and lush forests, Located a 90-minute drive from Vancouver, British Columbia, the lake is, unfortunately, something couch potatoes may never see. That’s because it’s a moderately challenging 18-km (11-mile) roundtrip hike into the lake. The hike takes about five or six hours total; many people make arrangements in advance to camp here overnight so they can enjoy the lake’s stunning beauty in-depth. 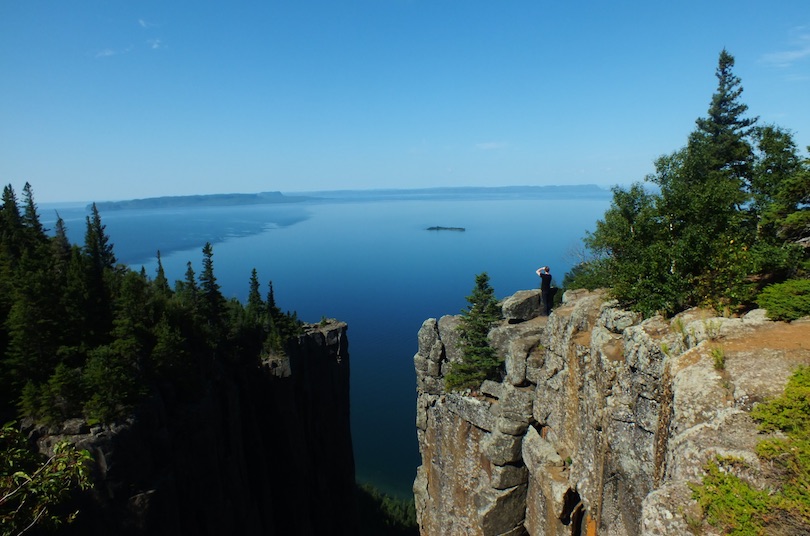 Created by volcanic action, Lake Superior has been around for hundreds of millions of years. It’s the largest of the Great Lakes, and one of the largest freshwater lakes in the world. The southern portion of the lake, which divides Canada and the United States, is known as “the graveyard of the Great Lakes, because of the high number of shipwrecks, mostly around Whitefish Point. The most famous ship lost was the SS Edmund Fitzgerald in 1975. This area is now an underwater preserve. 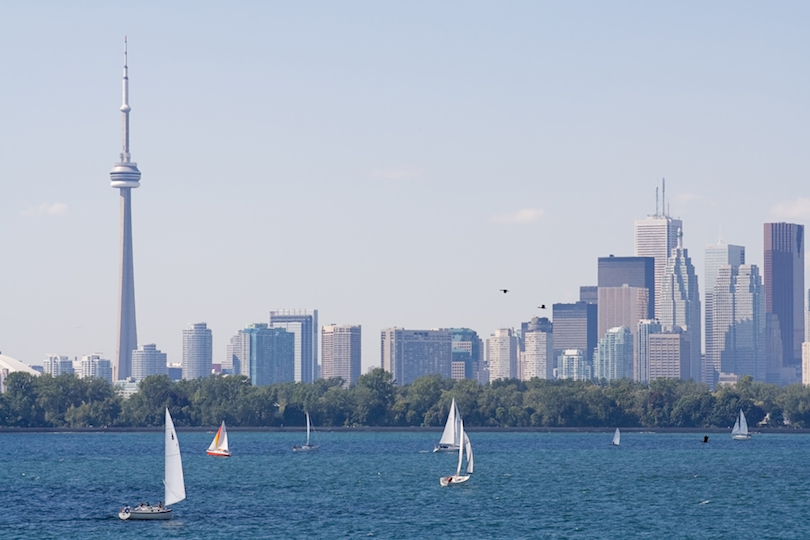 Lake Ontario, which gave its name to the Canadian Province it borders on, may be the smallest of the Great Lakes, but it’s still big enough to be the world’s 14th largest lake. Located below Niagara Falls, the lake is the Great Lakes’ link to the Atlantic Ocean, emptying first into the St. Lawrence River. Lighthouses stand proudly on its shores, while numerous islands dot the lake. The largest city on the Canadian side is Toronto. Swimming the 51 km (32 miles) across the lake is a challenge many swimmers take on, though only about 50 have completed the task. 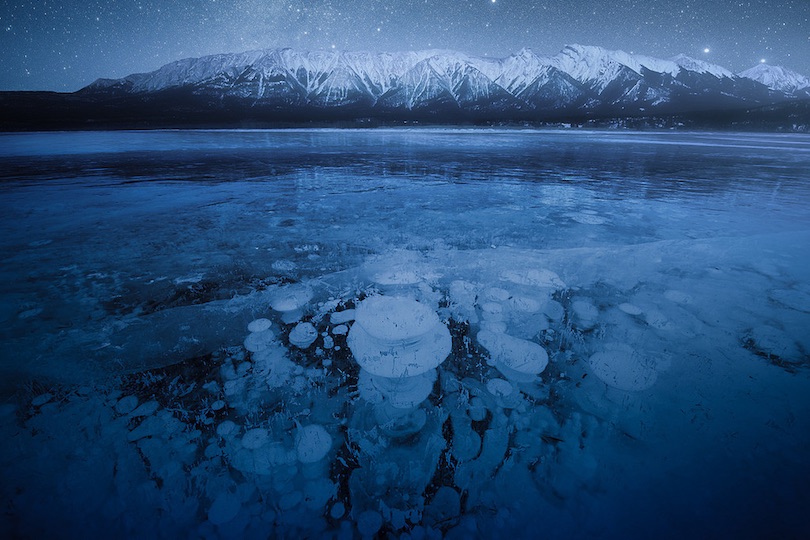 Abraham Lake on Alberta’s North Saskatchewan River is a newer lake. It wasn’t created by glacial action, though its waters are glacial blue, but rather by the damming of the river in 1972. It’s cold in the winter in the Canadian Rockies, but this is a great time to see the lake’s famous bubble phenomenon. Decaying plants emit methane, resulting in bubbling of the water as it freezes. Methane is flammable so don’t light up near the ice if you smoke. 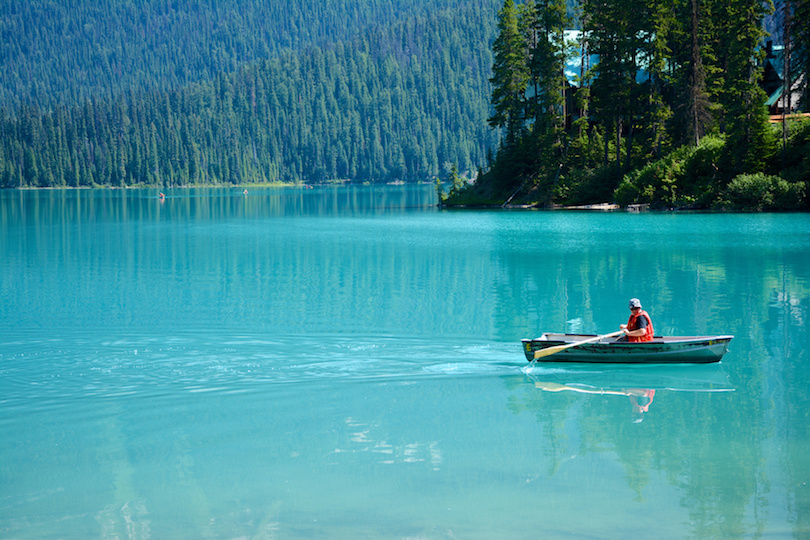 July is a good time to visit Emerald Lake, the largest of the lakes in Yoho National Park in the Canadian Rockies. That’s when the emerald green water is at its prettiest. The lake gets its color from the powdered limestone found in the water. The lake is generally frozen over until June, so waiting until July means the color will be at its peak. If you visit in the winter, however, it’s a great place to get in some cross-country skiing. 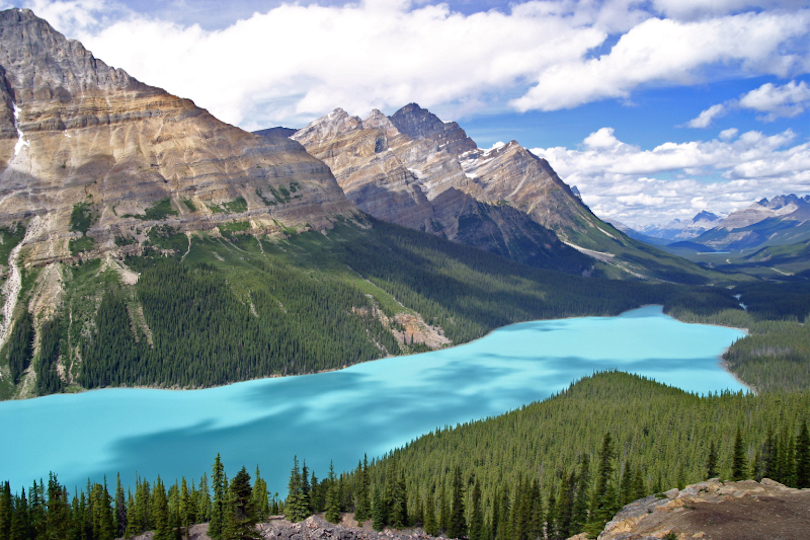 The deep turquoise blue waters of Peyto Lake are a sharp contract to the mountains that surround it, but it makes for a scenic combination. This Banff National Park lake is famous for its color that makes it hit with photographers. The best place to view this elongated body of water is from Bow Point on the Icefields Parkway that runs through western Alberta. Photographers seeking different views can hike up from there or even down to the lake itself. 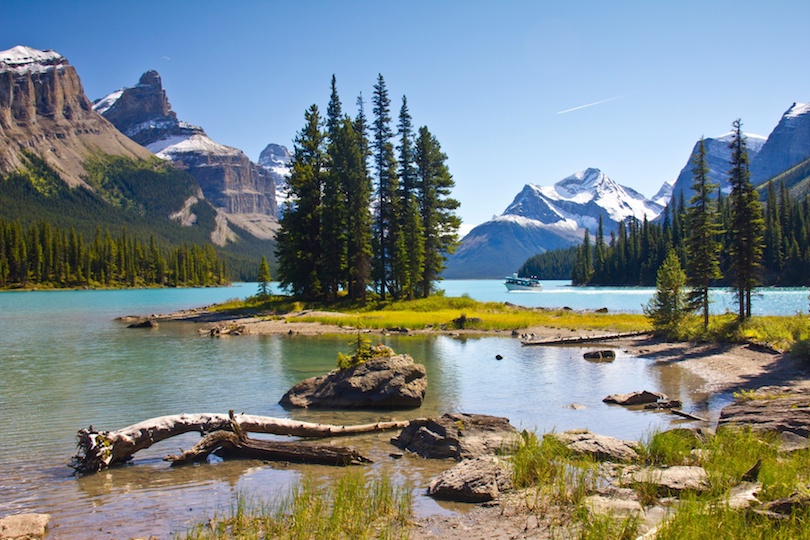 If you’re looking for Canadian lakes in pretty settings, Maligne Lake certainly fits the bill. This elongated lake, with its glacier blue waters, is nestled in the snow-capped Canadian Rockies of Alberta’s Jasper National Park. Maligne Lake (pronounced meLEEN) is the park’s largest lake. At 21 km (13 miles) long, it is the longest lake in the Canadian Rockies. You can hike around the lake or take a boat ride on it to Spirit Island, a tiny island with plenty of trees. 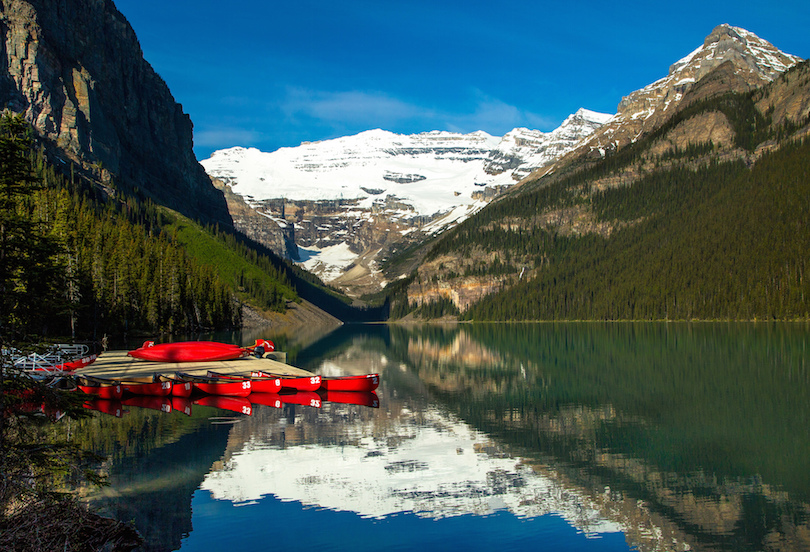 The lovely Lake Louise is the centerpiece of an all-season destination resort. It is the royalty of Canada’s beautiful lakes, maybe due to the fact it was named for Queen Victoria’s daughter, Princess Louise Caroline. Spectacularly beautiful is perhaps the best way to describe Lake Louise, which gets its turquoise blue water from Victoria Glacier in the background. Swim, if you dare, in the cold water or hike around the lake in the summer. Good skiing awaits you in the winter. 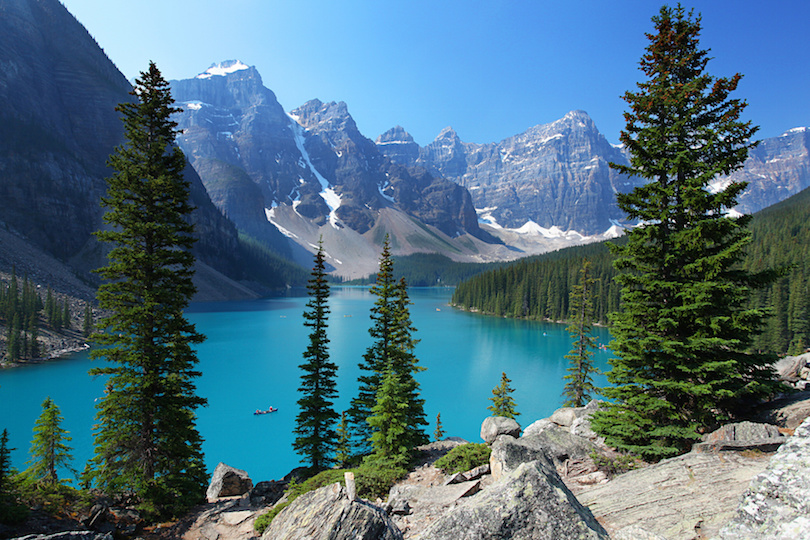 Bring lots of film or memory cards when you visit Moraine Lake. One look and you’ll quickly understand why it is probably the most photographed lake in Canada. It’s been pictured on Canadian currency, used as Windows’ log-in pages and featured in National Geographic’s photos of the day. This glacially fed lake is located in the Valley of the Ten Peaks in Banff National Park; the peaks serve as a backdrop for what’s probably the prettiest lake you’ll ever see.

These Photos Will Make You Fall In Love With Canada Lynx