Cajun cuisine, known for its spicy notes and heartiness, is a style of cooking that developed in the Southern reaches of the US after Acadian immigrants fled Canada in the 18th century. Inspired by rural French cooking, Cajun cuisine was developed by a population that lived off the land, adapting over centuries of cultural influences and geographical changes.

The Acadians were the original French settlers in North America. Immigrating to Canada in the early 1600s (the present-day Maritime Provinces), they lived off what was readily available to them. The traditional peasant-style recipes of the French countryside – usually meat and vegetables cooked with a thick sauce in a single pot – were adapted to include what the Acadians could catch or gather from both the land and sea. But when they refused to pledge allegiance to the British Crown in 1755, more than 14,000 Acadians were deported, many of whom made their way to Louisiana.

Upon settling in the South, these French-Canadian farmers once again adapted their cuisine to the ingredients that were at hand in the Acadiana region. Their cuisine evolved to include crab, oysters, alligator, crawfish, shrimp, catfish, and redfish caught in the nearby Gulf of Mexico and waters of the bayou – rather than the lobster, salmon, and cod found in the North Atlantic. Potatoes were replaced with rice, which thrived in Louisiana’s hot, sticky climate, bell peppers took the place of carrots in the culinary basis for stews (the Holy Trinity), and new spices (black pepper, cayenne) were introduced. Influences from the Spanish, Native Americans, and African-Americans also played a key role in making Cajun cuisine what it is today. 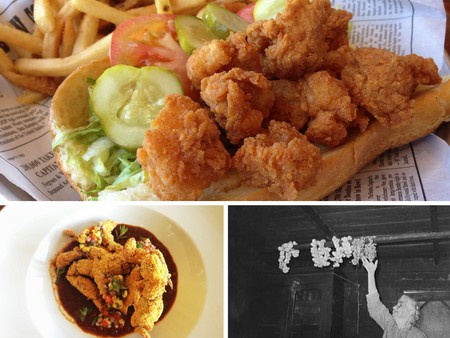 So what does Cajun cuisine look like? Cajun dishes are still heavily rooted in seafood, preserving the Acadian lifestyle of using what the land provides. Spices are key to developing flavor, a roux is almost always used, and the Holy Trinity – onion, celery, and green bell pepper – is the basis for nearly every dish. Popular Cajun dishes include gumbo, a soup made with filé, okra, chicken, sausage, and sometimes shrimp, the rice-focused jambalaya, boudin (pork sausage) or boudin balls (fried pork sausage), and rice and gravy. Community-based food celebrations are also still popular within the Acadia population, including the famed crawfish boil, family boucherie, cochon de lait, and the rural Mardi Gras.

Soon, Climate Change Could Cause This Canadian Province to Become an Island

The Top 10 Things to Do and See in Edmonton