Cool and Unusual Things to Do in Frankfurt, Germany

While Frankfurt is the financial center of Germany, there’s much more to this city along the Main River than the European Central Bank. Goethe’s house, a crashed tram and a peeing tree are among a handful of the quirkiest sights in Frankfurt.

Frankfurt has a lot to offer even the most discerning traveler, boasting a rich collection of museums and historic buildings. But if you’re happy to step off the beaten path, the city has some quirky, hidden gems that shouldn’t be missed. Here’s our list of the coolest things to do in the city. 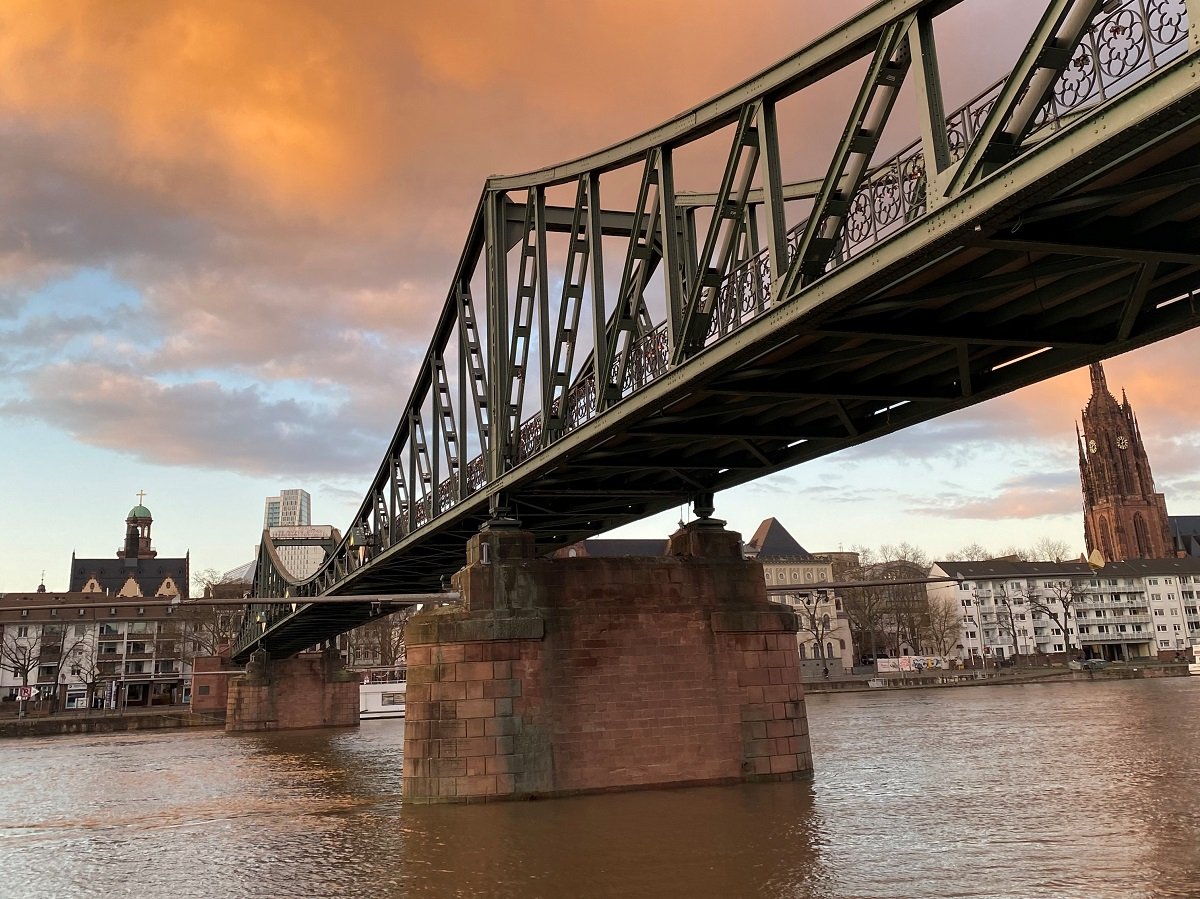 Thousands of loved-up couples have left colorful padlocks on the railings of this pedestrian bridge as tokens of their ever-lasting devotion. But even if you’re not quite ready to pledge your undying love, the spectacular views of the Main River and the downtown skyline, known as Mainhatten, make the Eiserner Steg worth a visit. Make sure you check out the view of the beautiful riverside museums lining the Sachsenhausen bank.

Experience the world as a blind person at the Dialog Museum 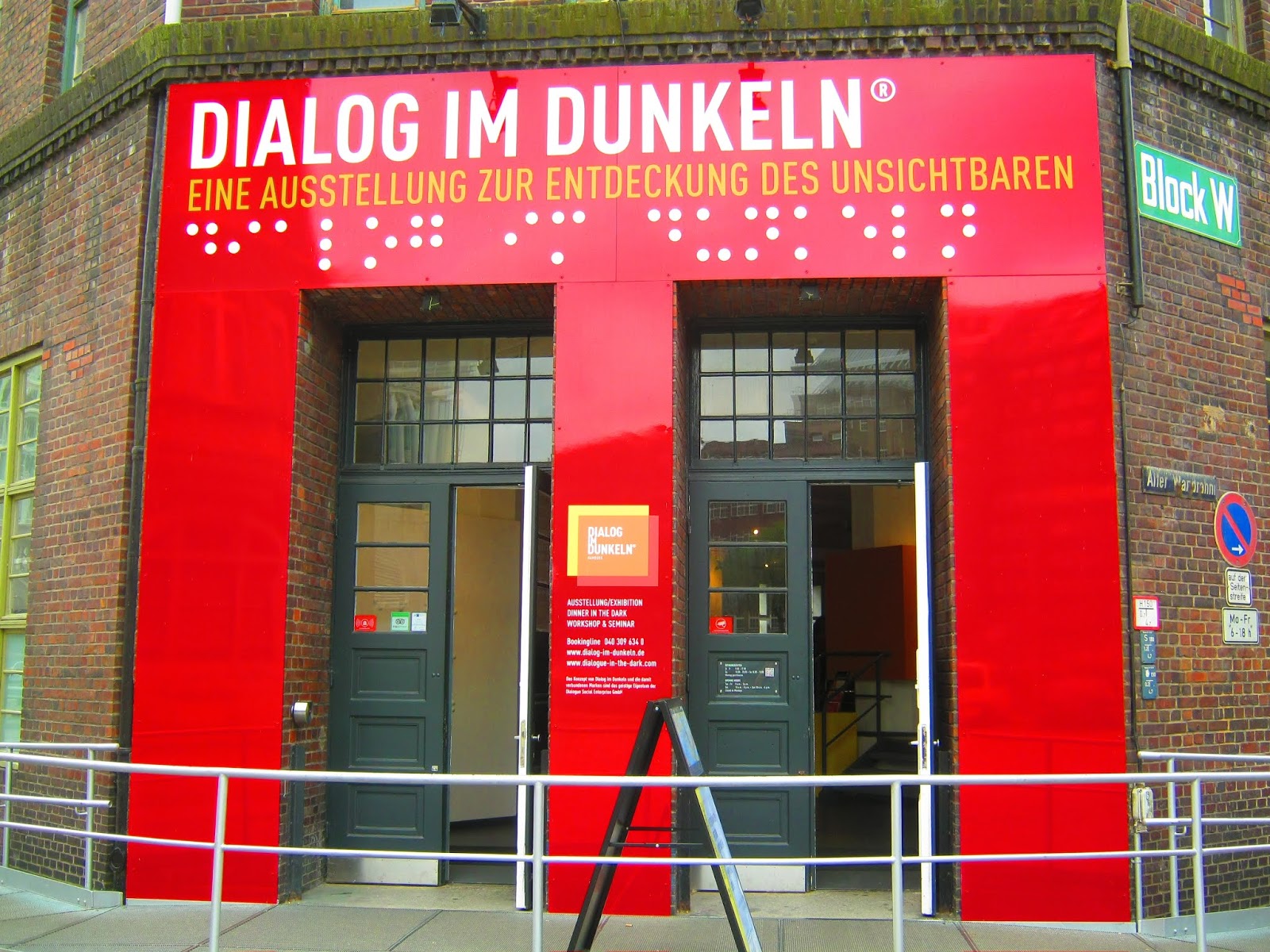 Prepare for a sensory overload when you visit the Dialog Museum, where you step into the shoes of a blind person for a while. Blind or visually impaired experts guide you as you make your way through various pitch-black themed rooms, where you’ll be forced to rely on your other senses. Will you be brave enough to take on everyday activities, such as crossing the road, in total darkness?

Ponder the tale of the Luftbrückendenkmal 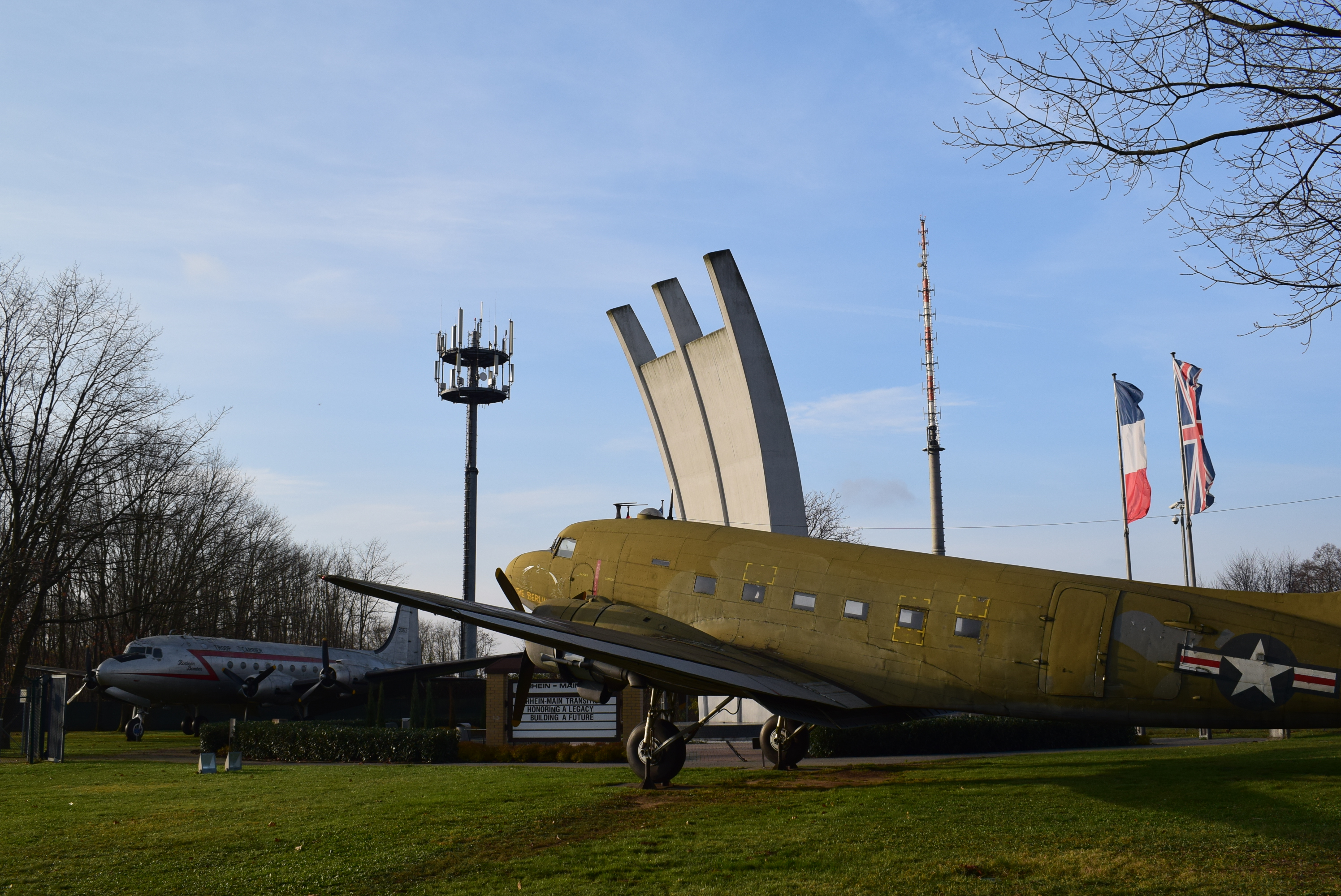 Designed to resemble a hungry hand reaching to the skies for help, the Luftbrückendenkmal in Frankfurt commemorates the Berlin Airlift in 1948. This is when the Allies dropped vital supplies by air into West Berlin, which a Soviet blockade had isolated. Known as the “candy bombers”, the pilots dropped candy as well as supplies to help lift the spirits of the children living there.

Spot the crashed tram at the Bockenheimer Warte subway 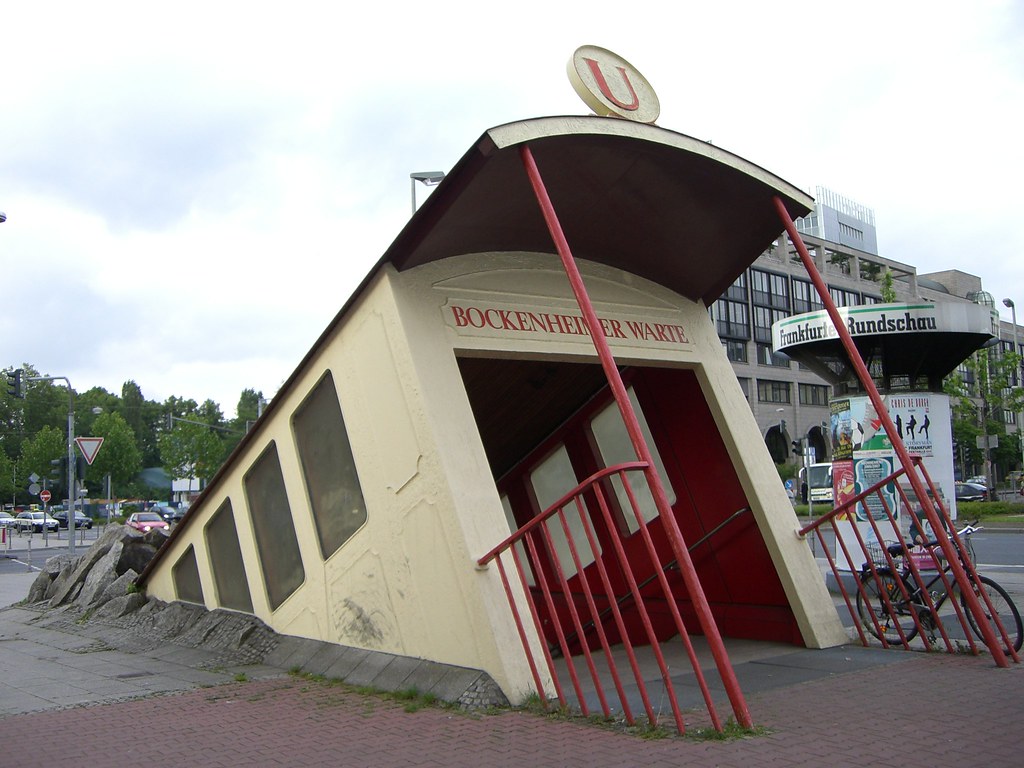 While the sight of an old tram crashing into the subway wouldn’t usually be something to celebrate, the one at Bockenheimer Warte subway is well worth hopping off the subway to have a peek at. Designed by architect Zbigniew Peter Pininski, the entrance looks like an old tram car half-buried in the rubble. When you’ve taken the obligatory selfie, it’s perfectly safe to climb down the stairs into the main station. Platform 9¾, eat your heart out!

Standing as a monument to Germany’s most famous author and poet, Johann Wolfgang von Goethe, his birthplace makes you feel that time has stood still. The imposing 18th-century building in the Innenstadt district is stuffed full of period furniture and artworks; it gives a real insight into how Goethe spent his youth. The Goethe Museum is next door and showcases a collection of paintings from the era as well as special exhibitions.

Take a selfie with a wine thief

While the rest of Germany swears by beer, Frankfurt’s favorite drink is apple wine. Frau Rauscher, a feisty German woman from nobody-knows-when, achieved legendary status thanks to her love for apple wine. As legend has it, she used to pinch apple wine from patrons enjoying a drink outdoors unabashedly. When admonished, she would spit the drink back and go on a drunken rant about there being no need for hassle as the drink was already “returned.” In the corner of the cobbled Klappergasse lane, you will find a spitting statue of Frau Rauscher outside an eponymous restaurant.

While you are never too far from a playground in Germany, few are as enchanting as Waldspielpark Goetheturm. This playground sits in the lap of a pristine forest and delights little ones with slides, a splash pool and a maze. This forest was Goethe’s favorite spot to pen his iconic words. This is a wonderful place to bring a picnic, go on a lazy stroll or simply enjoy precious solitude.

Experience being peed on by a tree 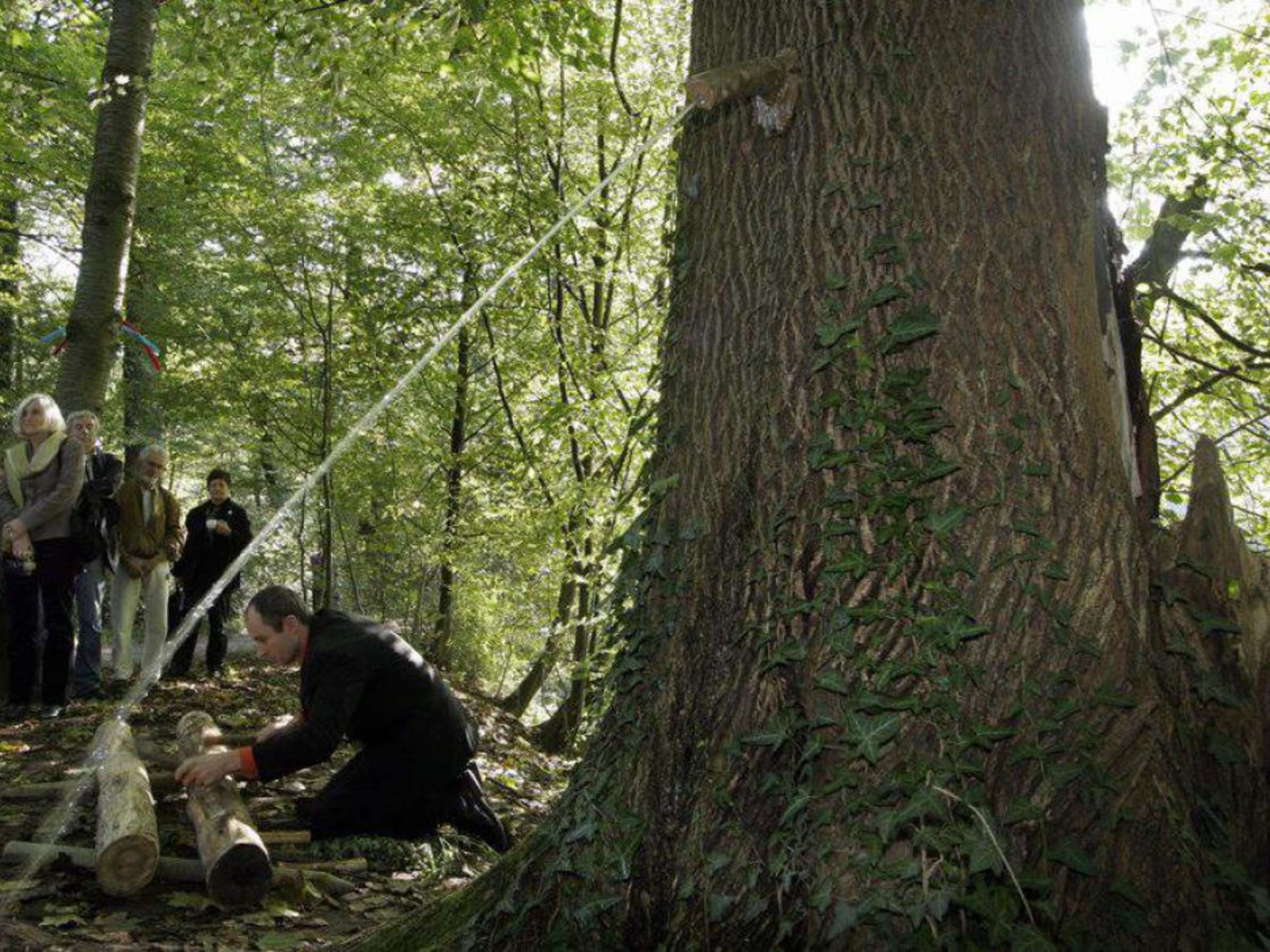 As part of the Frankfurt art initiative Komische Kunst (Comic Art), artist Friedrich Karl Waechter decided to give a tree at Lake Jacobiweiher, near the Oberschweinstiege, a voice to express itself. The tree looks perfectly normal until you get close, and then out of nowhere, you are sprinkled on! Once passers-by get over the initial shock, it usually tickles their sense of humor. A sign near the Pinkelbaum (peeing tree) reads, “For 300 years I was peed on, starting today I pee back” (translated from German).

Frankfurt is the business hub of Germany and home to large banks and the stock exchange. It only fits that the financial heritage of the city is celebrated with a Money Museum (Geldmuseum der Deutschen Bundesbank). Walkthrough the process of money printing and the role of the European Central Bank, explained through interactive displays – seriously, it’s actually much more fun than it sounds. And the best part? It’s totally free to visit.

Things To Do In Quedlinburg: Germany’s Medieval Treasure Town

5 Waterfalls In Germany To Witness The Charismatic Beauty Of Nature

The Bavarian Alps: Your Complete Guide To A Fabulous Vacation

53 thoughts on “Cool and Unusual Things to Do in Frankfurt, Germany”