Fun Facts You Do Not Know About Moose

The moose is one of the most incredible mammals to roam Canada’s forests and the rest of the Northern Hemisphere. If you’ve never seen them in person or are not familiar with the animal, you might picture something close to a deer or even one of Santa’s reindeer. In reality, the moose is its own distinct species with a special set of qualities and characteristics that make it unique!

If you’re interested in learning more about these majestic beasts, we’ve got the lowdown on everything you want to know. Who knows—maybe you’ll even want the opportunity to come face-to-face with a moose and bring one home yourself!

But they can still be prey.

Moose don’t have many predators to contend with in the wild, but that doesn’t mean they’re fully in the clear. In Eurasia, the Siberian tiger is their primary enemy—and one of the only mammals that will attack a healthy adult moose.

Other predators throughout the Northern Hemisphere are chiefly gray wolf packs and bears. Their targets are typically either old or sick moose or calves. You wouldn’t expect it, but all it takes is one infected bite to do these giants in.

A bull’s antlers are his most powerful tool for attracting mates and scaring off predators and competition. You might be surprised to learn that despite this, bull moose lose their antlers in the winter and grow them back even bigger in the spring. The purpose of antler shedding is to help moose conserve energy in the cold, scarce winter months.

They have a four-chambered stomach.

They are herbivores who survive primarily on bark, shrubs, and a variety of other plant life. In fact, to maintain their massive size, they eat about 73 pounds of food a day in the summer and 34 pounds in winter! Their first stomach chamber breaks down what they consume; then the other three extract the nutrients. The moose will then regurgitate the partially digested food and chew on the cud. 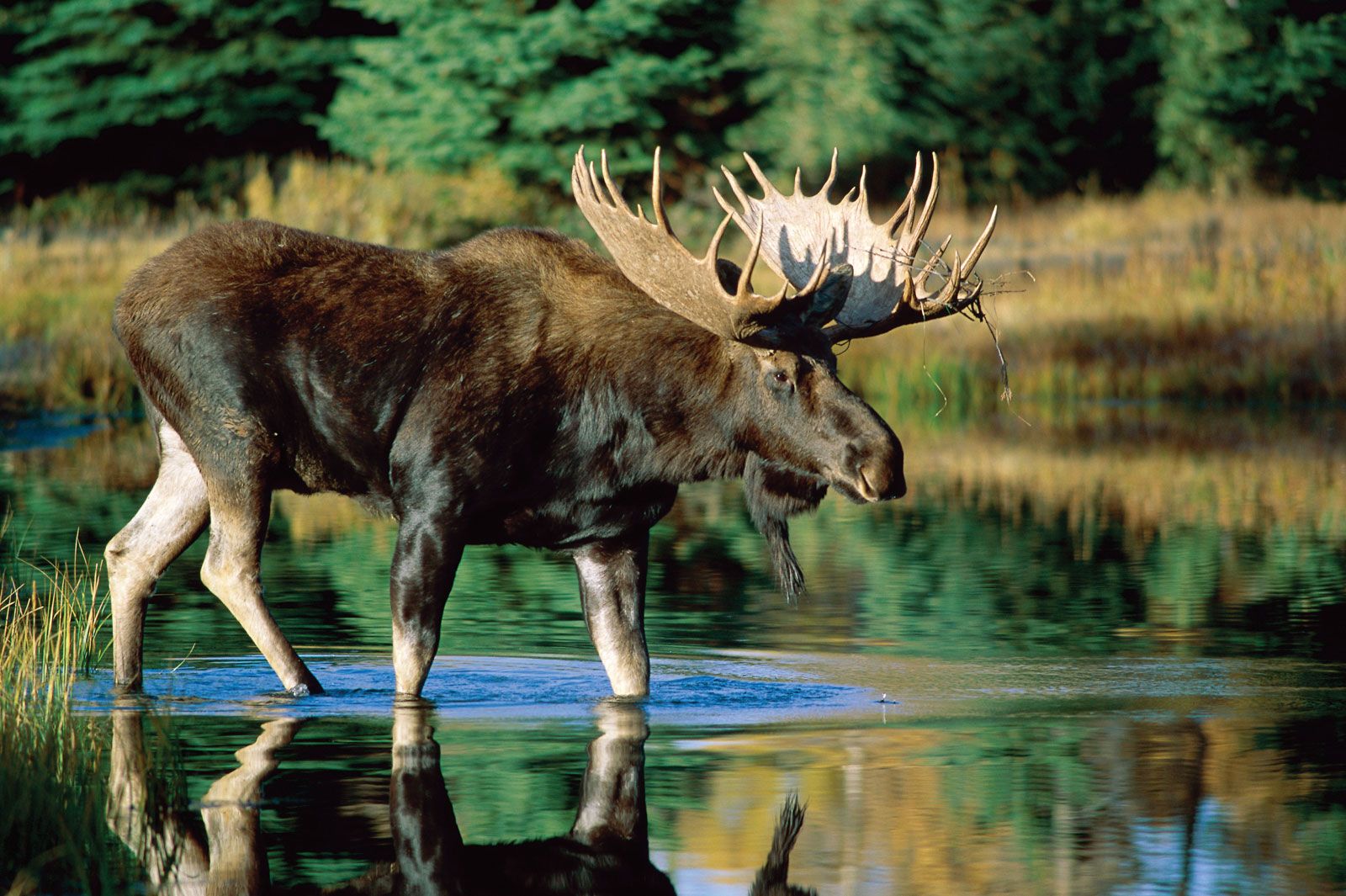 You might not think of a 1,500-pound behemoth as graceful in the water, but this is actually where moose feel most at home! They can swim up to six miles per hour and begin to do it innately as calves. Moose like to feed on aquatic vegetation as well.

They are solitary animals, except in mating season.

Unlike most of their deer family counterparts, moose do not form herds and are considered solitary browsers. The only time they gather is throughout September and October for mating season. A bull moose will seek out one or multiple cows each season, breed, then depart until next year.

Calves follow their mothers for the first year of life for protection from predators. They typically go out on their own after developing their natural survival skills by the following mating season.

Their eyes are positioned toward either side of their head, similar to a horse. This placement creates large blind spots in front of them, putting them at a disadvantage in eyesight. They make up for this deficiency with exceptional hearing and sense of smell.

>>5 Facts You May Not Know About Koalas
>>Mother Leopard Helps Her Cubs Cross The Road, The Video Is Fascinating
>>Meet the gentle giants at Addo Elephant Park