The 10 Best Places to Go Bungy Jumping in New Zealand

In many respects New Zealand is a land of extremes. Geographically it’s almost as remote as possible to be in this modern world. The weather can be harsh and then beautiful in the same day, and it has some of the most untouched scenery on the planet. The country is also home to extreme sports galore. Here is our guide to the 10 best bungy jumps, a pastime that New Zealand actually invented!

The Nevis Bungy and Swing

If you’re set on doing a bungy jump in New Zealand, why not go for the big daddy straight out of the gate? The Nevis Bungy is the biggest in New Zealand and, what is more, the third-highest bungy jump in the world. The platform itself is 134m above the Nevis Canyon floor. That’s three times the height of the Statue of Liberty. Casting yourself into the void at this height might strike many as complete lunacy, and it is. What sets the Nevis Bungy in a class of its own is that the platform itself is suspended in space in the middle of the gorge by wires. You have to get a cable car out to the platform, and that is scary enough in itself, and that’s after heading out on a 40-minute cross-country ride in a 4×4 from Queenstown.

This is not your classic bungy set in a natural location. The Agroventures team will ensure you’re 100% safe with all their harnesses. Sure, you’re not hurling yourself off a cliff and into a river, but if all you want to do is tick off a New Zealand bungy then this is the place. Rotorua offers a bungy jump for those new to it, a little scared of the more extreme ones or just plain looking to save a bit of cash. This is the best aspect of bungy jumping here; the price. If you’re traveling on a strict budget but want to tick a bungy off in the land that brought this absurd hobby to the world, head to Rotorua.

Everyone knows the bungy is a New Zealand bound thrillseekers‘ rite of passage. But doing it at the very home of commercial bungy jumping will make the experience so much more special. So, head on over to Queenstown, harness yourself up to the Kawarau Bridge and prepare to plunge towards the water. You can elect to take the plunge or stay high and dry. After catching your breath, make sure to check out some of the other epic attractions New Zealand’s adventure capital is renowned for. 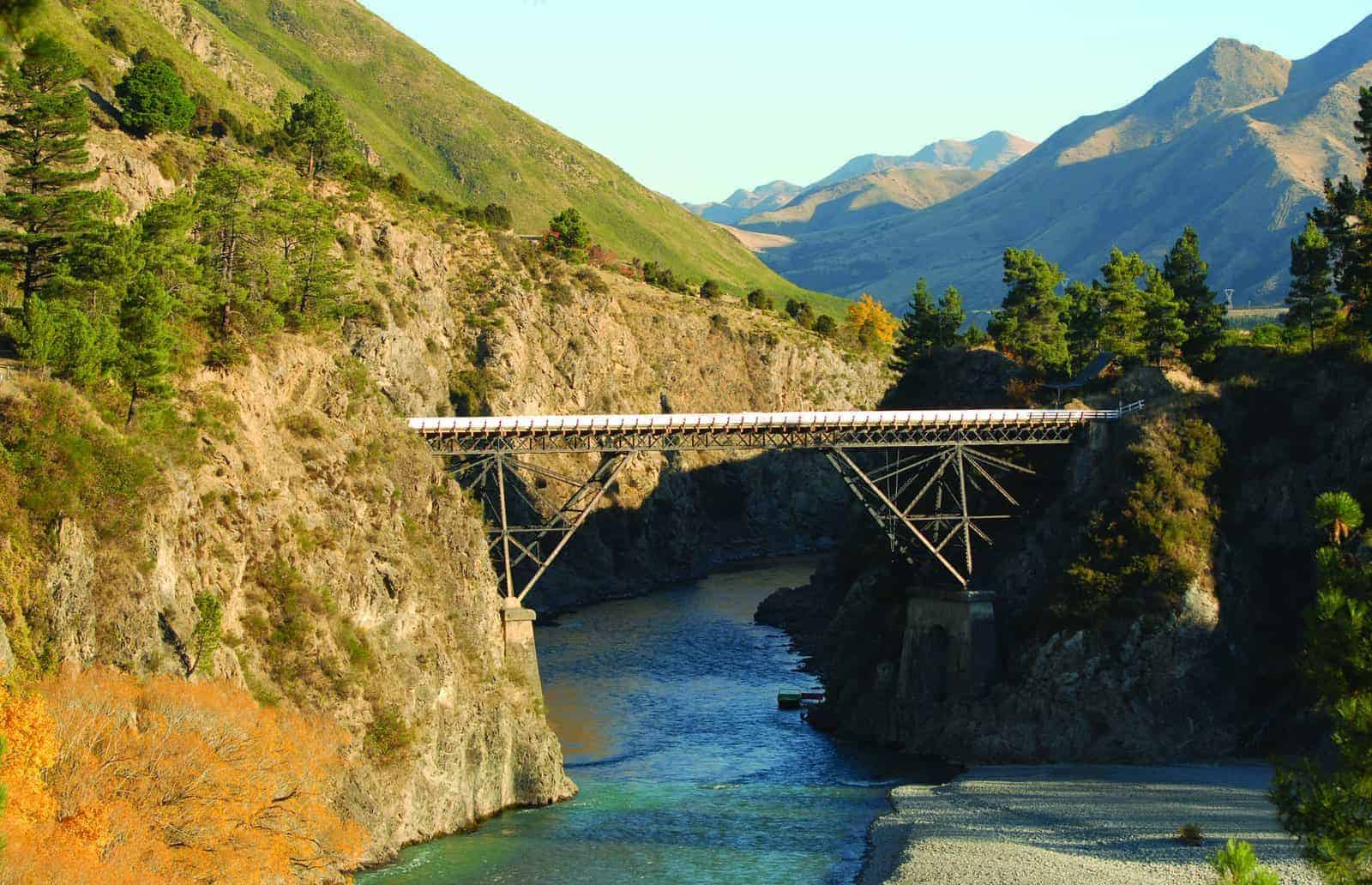 This 35m jump is bound to leave you shaking in excitement! Perhaps not in the same league when compared to a jump the likes of the Nevis Bungy in Queenstown, at over 100m lower, this little stunt will still get the b.l.o.o.d thundering around the body. The bungy from a historic bridge in this alpine river valley setting is a pretty stunning jumping location! You might just want to leave out that it’s actually the lowest bungy in NZ when telling friends about it later. 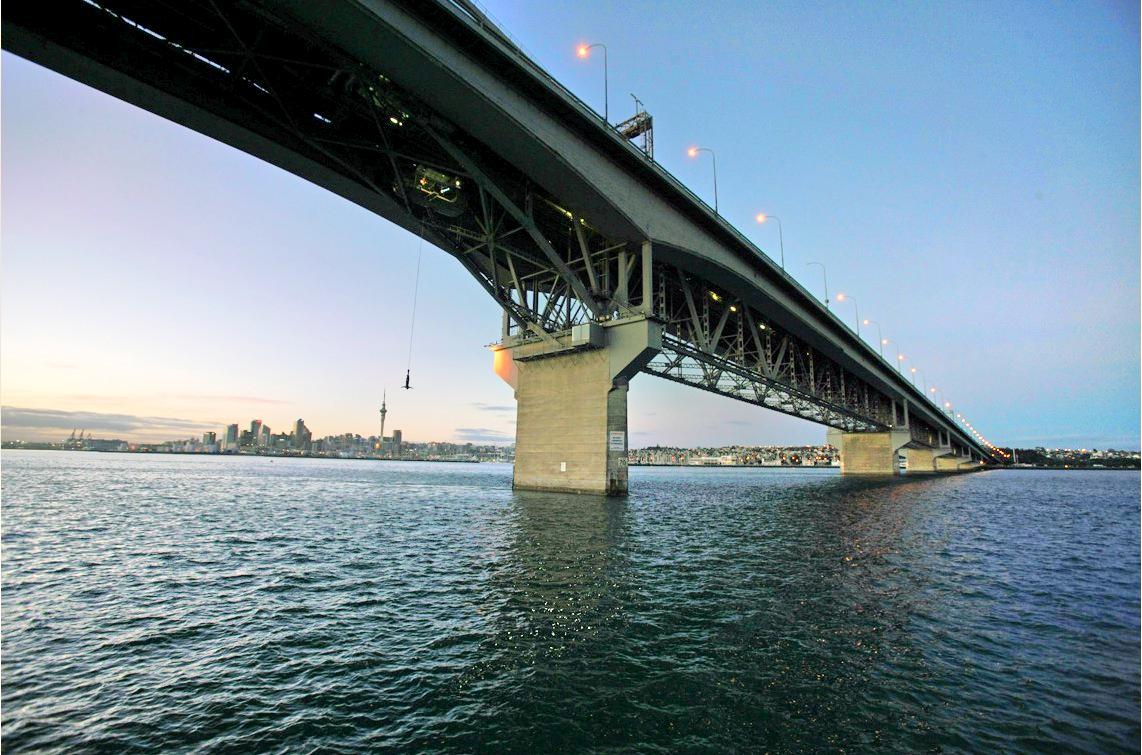 Dating back to the 1950s, the Auckland Harbour Bridge stretches across 1,020m (3,346 ft). It consists of an eight-lane motorway that connects the city center to the North Shore through the Waitemata Harbour. Prior to its construction, the only way to reach the North Shore from the city was via ferry. In recent years, the bridge has also become a popular spot for bungy jumping and guided climbs.

Perched tenuously over the skyline of Queenstown, with soaring views of Lake Wakatipu and the snowy Southern Alps in the distance, The Ledge Bungy & Swing unquestionably offers up one of the town’s most dramatic descents. The ledge is the only range where you can do bungy jumping in New Zealand at night and enjoy the city’s scenic beauty. The most versatile bungy jumping experience offers you to do the jump in whichever way you want to–you can flip, twist or even do a matrix. It’s not a bungy in the strictest sense of the word, but is still an activity that requires a certain detachment from common sense and a strange desire to free-fall for an extended period of time. Set more than 100m above the turquoise waters of the gushing Shotover River, this swing-style pendulum descent offers a totally different adrenaline rush. Guests are harnessed in on the protruding platform before being cast from the side in a variety of different ways, crashing 60m into the heart of the canyon and then swinging sideways through the gorge. Not only is it a great way to taste the heart-pumping rush of bungy, but it’s also a fantastic introduction to the beautiful and rugged scenery of the Shotover Canyon, Queenstown style. 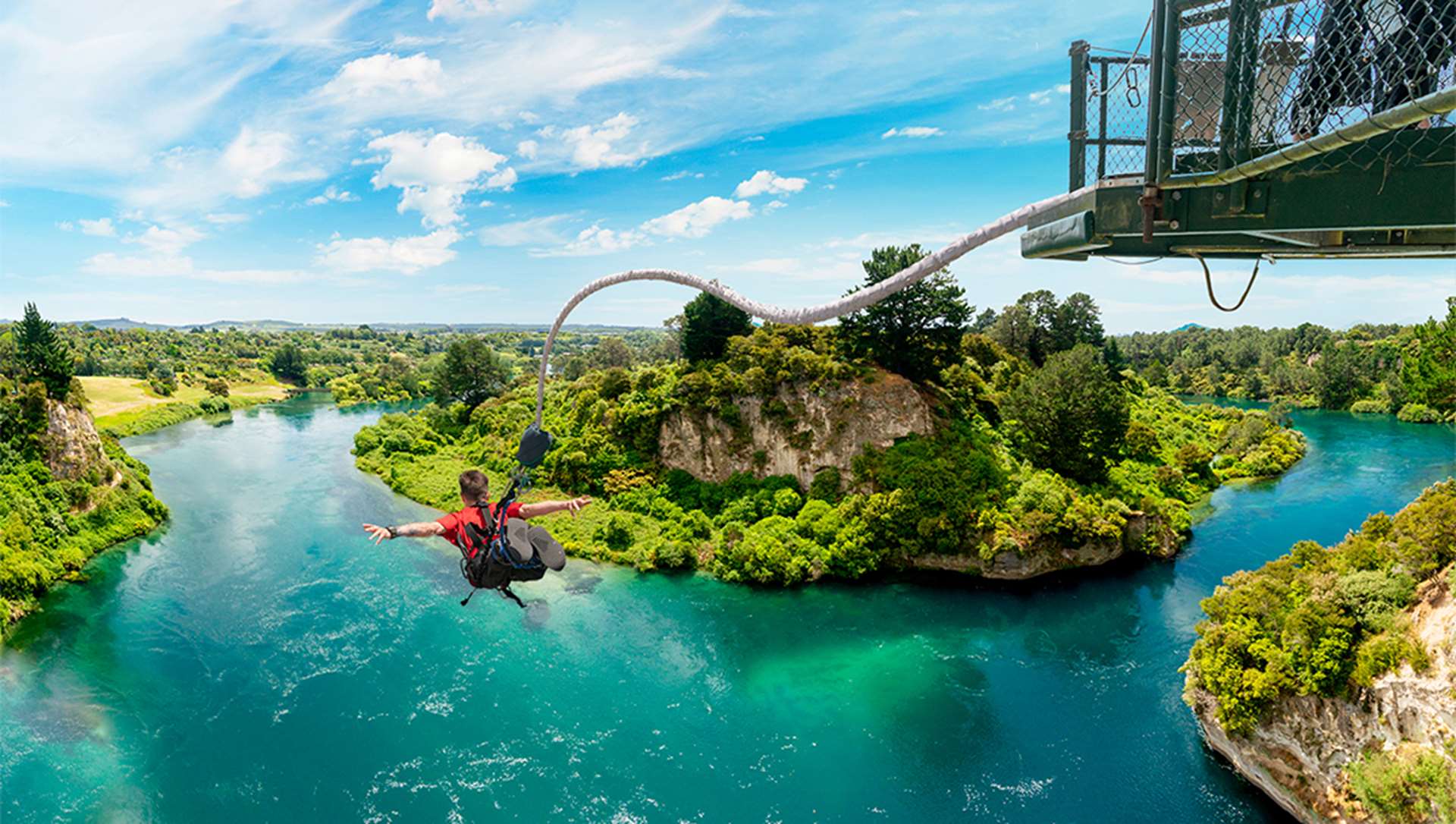 When a visitor thinks of Taupo they don’t initially think of the lovely town. Their minds take a leap and end up in the lake, Lake Taupo that is. So it’s of no surprise that the guys and gals that run the Taupo bungy are masters in the plunge. Whether you fancy just running your fingers through the water after you’ve spent the last couple of seconds hurtling face-first towards it, or want the full body treatment, the experts at Taupo bungy have got you covered. Or not, as the case may be. 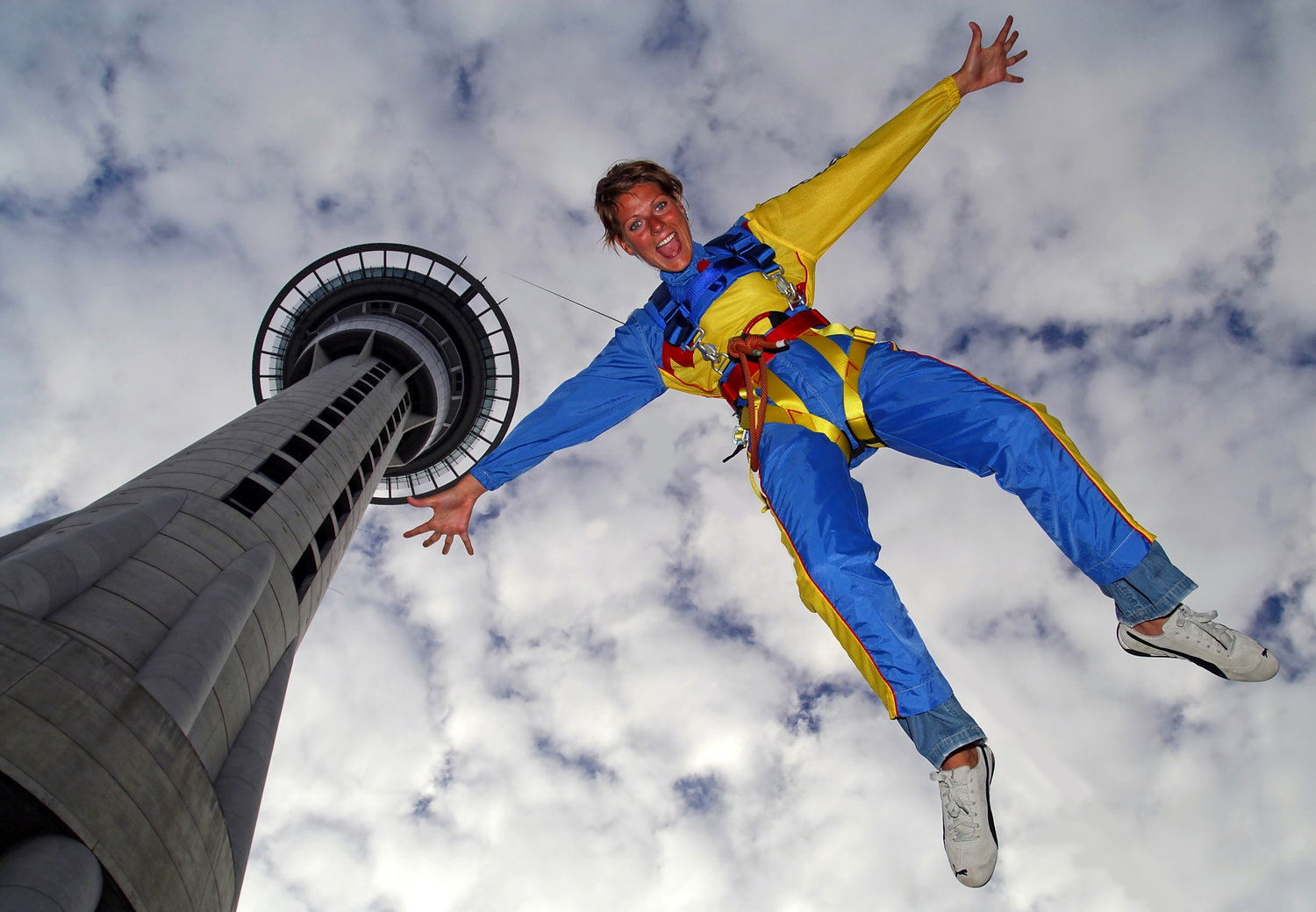 Anyone who has been to Auckland, thought about going to Auckland, or had a cursory look at going to New Zealand even, will be familiar with the Skytower. It epitomizes Auckland and is one of the most recognizable landmarks in the entire country. So, what better way to honor it than dangling yourself over the edge of this iconic building by a harness—a sturdy one—and then plummeting 1,076 ft towards the pavement. It isn’t a bungy exactly, but you won’t be thinking about the technicalities of this experience when you’re going through it. 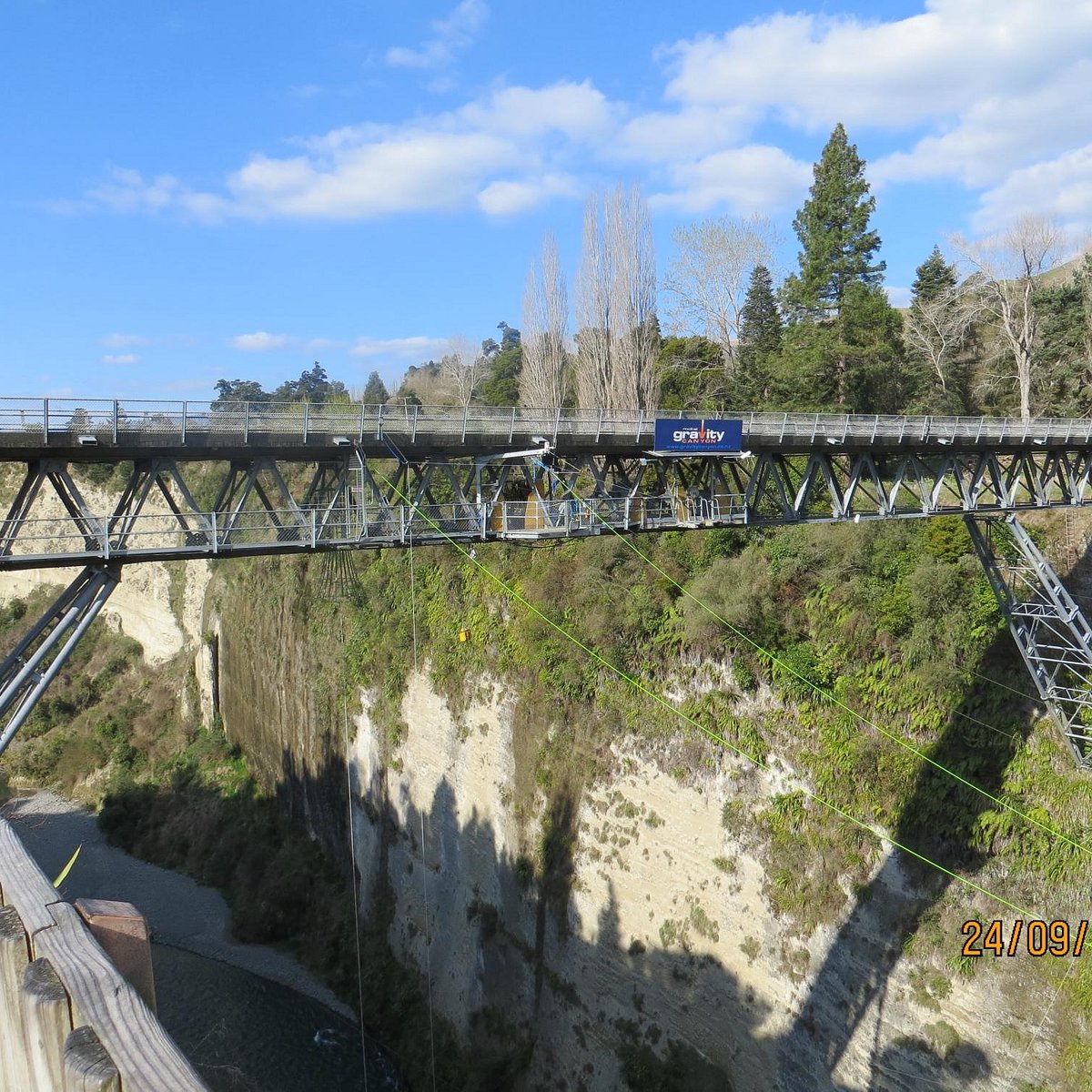 It may be closed at present but the Mokai Gravity Canyon has been such a fixture on the New Zealand extreme activities circuit that we have to put it down here, because it won’t be long until someone comes and snaps it up. Located in Taihape, two hours south of Taupo, this destination boasts three world-class adventure activities. Ride the extreme flying fox, bungy from a thrilling 80m or experience the 50m free-fall of the bridge swing.

The Most Beautiful Spots in Hamilton, New Zealand

The Most Difficult Places in New Zealand to Visit

10 Jobs Travelers Can Do in New Zealand