So, you’ve admired the impressive marble sculptures at the Museo Archeologico Nazionale, gazed across the city skyline from the Certosa di San Martino and followed in the footsteps of Julia Roberts in Eat, Pray, Love to eat pizza at L’Antica Pizzeria da Michele. What else does Naples have to offer? Find out with this list of non-touristy things to see and do in Italy’s third-largest city.

Keen to explore Naples and beyond? Book yourself onto our specially curated 10-day trip to southern Italy and tour the Amalfi Coast and the delights of Puglia with a Local Insider.

Come face-to-face with Napoli’s previous residents at the Fontanelle Cemetery in the Materdei neighbourhood. Thousands of anonymous remains – many of them plague victims – were laid to rest in these volcanic caves from the 17th-century onwards. The site even spawned a cult with devotees dedicated to caring for the unnamed remains until the cemetery was closed in 1969. 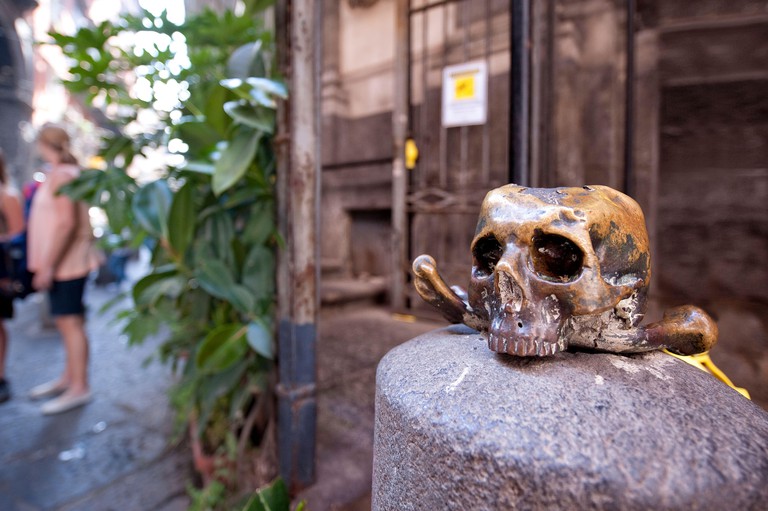 The Neapolitan cult of the dead continues at the Chiesa del Purgatorio ad Arco – one look at its baroque facade and morbid iconography and it’s obvious this church is different from the rest. Built in 1616, the church is split across two levels. The street-level church contains a number of fascinating death-related artworks, while the underground hypogeum was once a burial place for the city’s pezzentelle – the poorest residents without family or a home. Look out for the skull of Lucia, a young bride who supposedly died in a shipwreck along with her husband.

The church of saints Marcellino and Festo – formed when two adjacent monasteries were united in the 16th century – is lavishly decorated with gilded stucco, colourful frescoes and carved woodwork. However, save for special occasions when the church doors are opened, as it’s only accessible with a reservation. Fortunately, part of the complex is now occupied by the Museum of Paleontology – so for a €2.50 (£2.11) entrance ticket, visitors can at least see the church’s rectangular cloister filled with lush green palms and trickling water features. 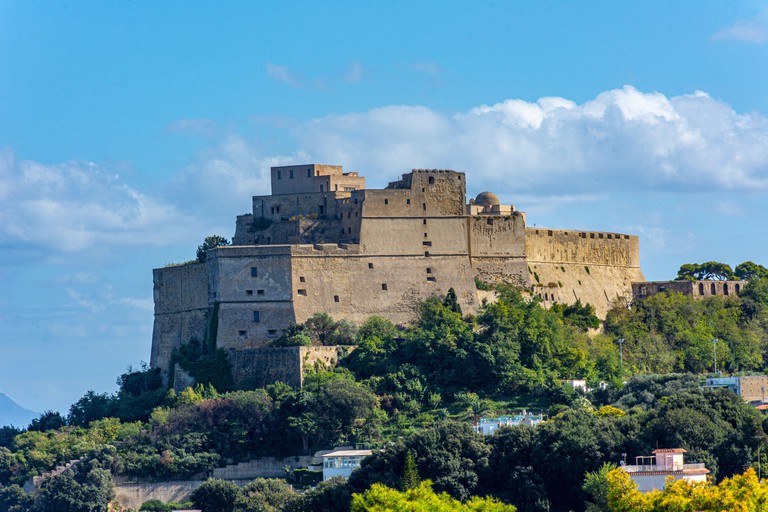 Built in the late 15th-century by the Aragonese, the Castle of Baia is perched on a rocky outcrop of the Bay of Pozzuoli – 24km (15mi) outside Naples. Originally built to defend against possible French invasion, the castle now displays local archaeological treasures found in the volcanic Campi Flegrei area. Admission is only €4 (£3.37) on weekends – but check the website for the latest information, as parts of the museum are sometimes closed. The last entrance is at 1pm.

In 1923, a fire broke out in the Church of San Carlo all’Arena and sent a marble crucifix crashing to the floor. The sculpture – carved by Michelangelo Naccherino in 1599 – was painstakingly pieced back together and returned to the church. Known ever since as il crocifisso ferito – or the wounded crucifix – the statue is all the more moving for its injuries. 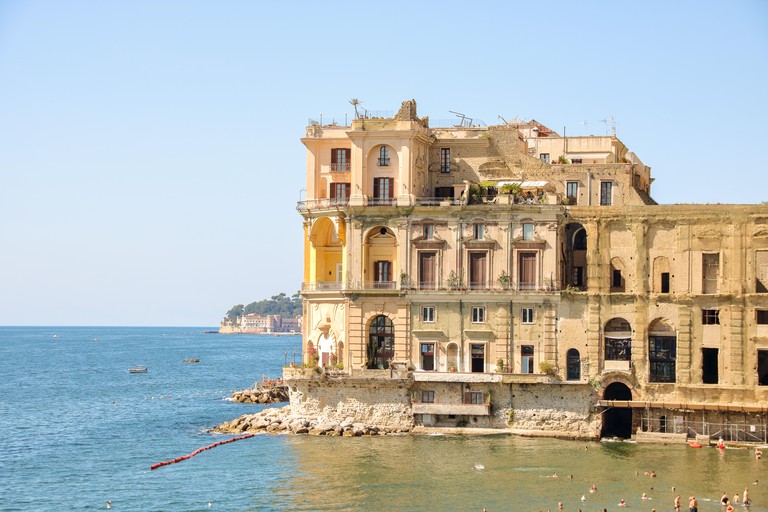 Palazzo Donn’Anna isn’t open to the public, but its eerie beauty and place in local folklore make it well worth a look anyway. Overlooking the sea, the villa was built in the 17th-century for Anna Carafa – the princess of Stigliano in southern Italy – by her husband Ramiro Guzman, the Spanish viceroy of Naples. One story goes that Anna was killed during a revolt against the royals, while Ramiro fled to Madrid, leaving her ghost to haunt the palace for eternity.

The monumental building of the Chamber of Commerce was built in 1895 and housed the stock exchange until it was moved to Milan in 1992. Many locals are unaware that the grandiose neo-Renaissance trading floor – lined with marble columns and lunettes depicting Hermes and Dionysus – can still be visited.

Built in the 1830s in the Posillipo area of the city, Villa Doria d’Angri affords stunning views across the Port of Naples and beyond. In their prime, the villa terraces featured lush hanging gardens with fountains and exotic plants. Much of the extravagant interiors have also been lost to time – but some of the original Pompeian-style frescoes survive in a few rooms. The building is now owned by the Parthenope University of Naples and houses a naval museum. 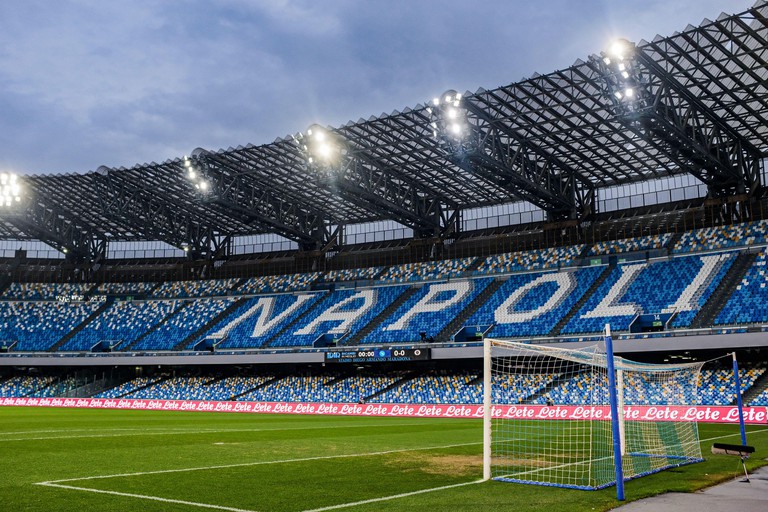 The Diego Armando Maradona Stadium might seat 60,000 people, but taking in a football match is pretty much off the radar of most tourists in Naples. It’s been almost 30 years since SSC Napoli won a scudetto – but the city’s passion for the beautiful game remains strong. Get to know the calcio-loving locals at a partita.

Dating back to 1738, the Palazzo Dello Spagnolo was designed by Ferdinando Sanfelice and is perhaps the most important example of Neapolitan baroque civil architecture. The star of the show is undoubtedly the monumental staircase – its five archways and double-ramped stairwell were also featured in the films Processo alla città and Giudizio Universal. 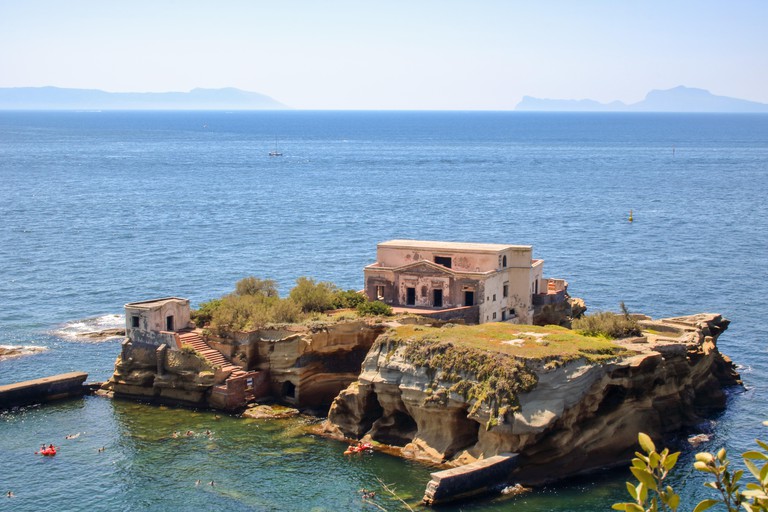 The Isola Della Gaiola is a small but perfectly formed island – well, two islets, actually – that affords stunning panoramic views across the Gulf of Naples. Yet, the island remains deserted with locals telling stories of a curse that befalls anyone who dares visit this secluded spot. Today, the island is part of the Gaiola Underwater Park and is a scenic destination for snorkelling and diving, with archaeological ruins and many species of wildlife to admire.

11 Scams All Tourists Should Avoid in Italy