Roman cuisine is most loved for being exceedingly flavourful, simple and satisfying. Continuing centuries of old-school traditions, dishes in the Italian capital have their roots in “poor man’s food”, constituting a creative cuisine that pays homage to the local delicacies in the Lazio region. So don’t settle for anything less than the best – follow our guide to the top foods to eat in Rome.

Supplì at I Supplì 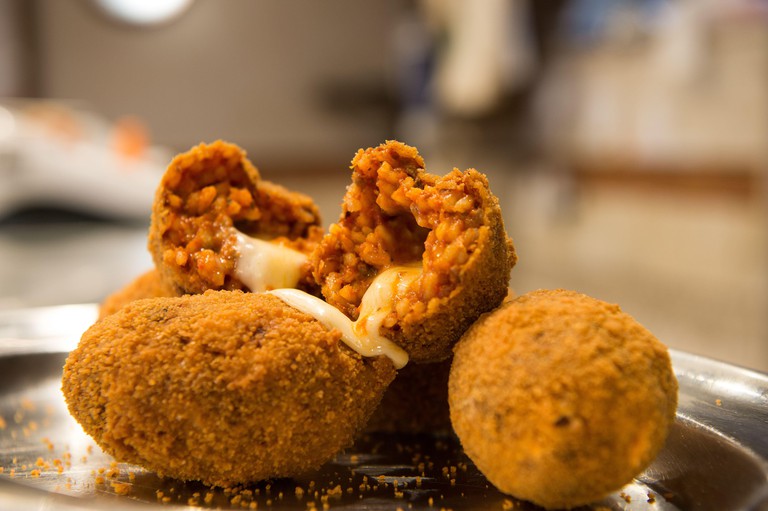 Any Roman will agree, the best way to whet your appetite before digging into a personal pizza is with fritti: deep-fried goodies that are tasty, comforting and oh-so-satisfying. A classic choice is the supplì, a fried rice-ball mixed with ragù and mozzarella and cooked to perfection. Try it at I Supplì, a takeaway joint in Trastevere that makes delicious variations. 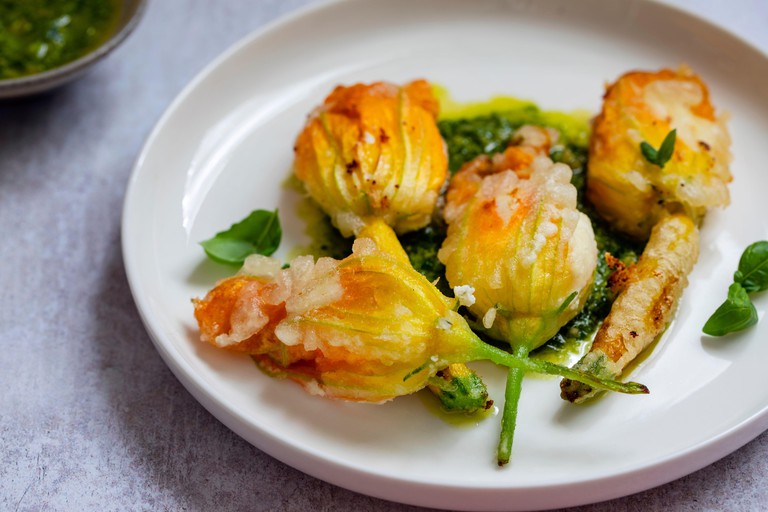 Another fried favourite is fiori di zucca, which are battered zucchini flowers stuffed with mozzarella and anchovies. Not only is it a beautiful dish, it is extremely flavourful: oozing mozzarella with a nice kick from the anchovies. If you’d prefer to try it sans fish though, Emma makes a delightful version with only mozzarella (you can’t go wrong with any of the fritti here). 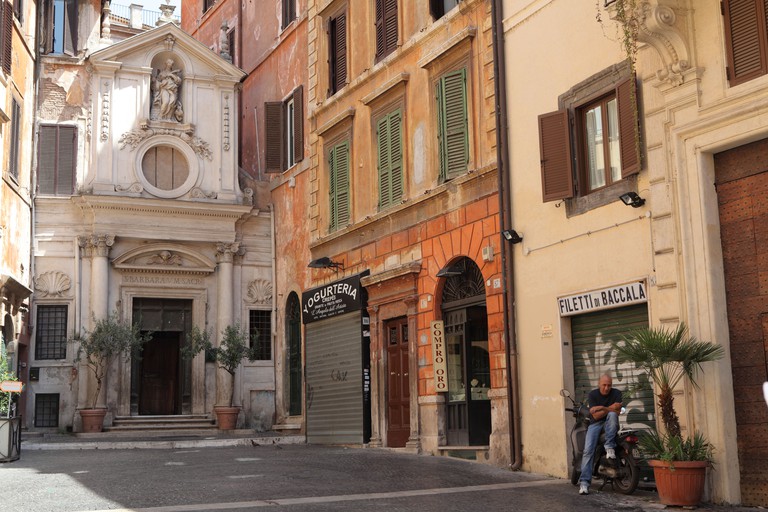 Cod is popular in Mediterranean cuisine and is a staple of Roman-Jewish cuisine. In Rome, you’ll find the salted cod fried in an eggy batter and served piping hot. Taste it at Dar Filettaro a Santa Barbara, a minuscule spot with a bright “filetti di baccalà” sign near Campo de’ Fiori that has been serving up the fish to hungry patrons since the 1950s – and the aesthetic hasn’t changed one bit. 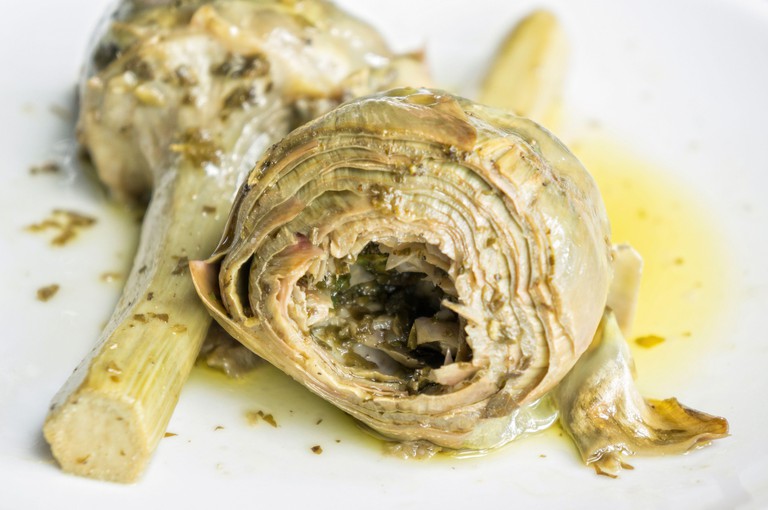 Roman artichokes are another mainstay of Roman-Jewish cuisine, and they just may change the way you think of this vegetable. Artichokes cooked alla romana style are braised, stuffed with herbs and sprinkled with lemon until they acquire a buttery texture and melt in your mouth. They’re a seasonal appetizer, so you’ll only find artichokes on the menu in the spring and fall. Order them at a typical trattoria such as Hostaria Romana. 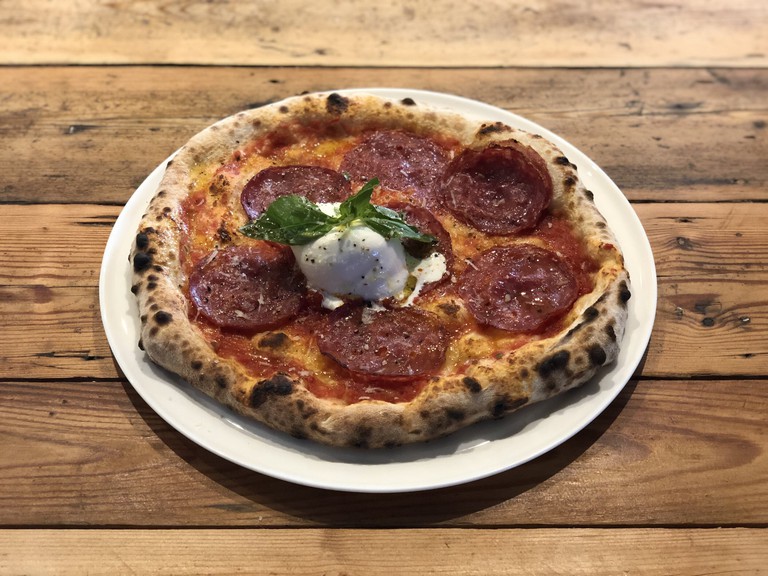 Each region of Italy has its preferred street food, and in Rome it is certainly pizza by the slice (al taglio). While Romans tend to stick to simple pairings (tomato sauce with parsley, focaccia with rosemary and sea salt), Gabriele Bonci has inaugurated a whole new world of flavours at Bonci Pizzarium. His creative combinations span all flavours and shades of the rainbow: figs with Parmesan, pumpkin cream with mozzarella and pancetta… Be sure to order a selection of slices for the best experience.

Though pizza was originally invented in Naples, the Roman version is thinner, crisper and lighter than its Neapolitan cousin. Again, flavours tend towards simple: many Romans opt for a classic margherita or add a pair of ingredients. For more oomph, order the capricciosa topped with prosciutto, mushrooms, olives and a hard-boiled egg. Da Remo in Testaccio makes a great pie in a traditional atmosphere for an all-around Roman vibe. 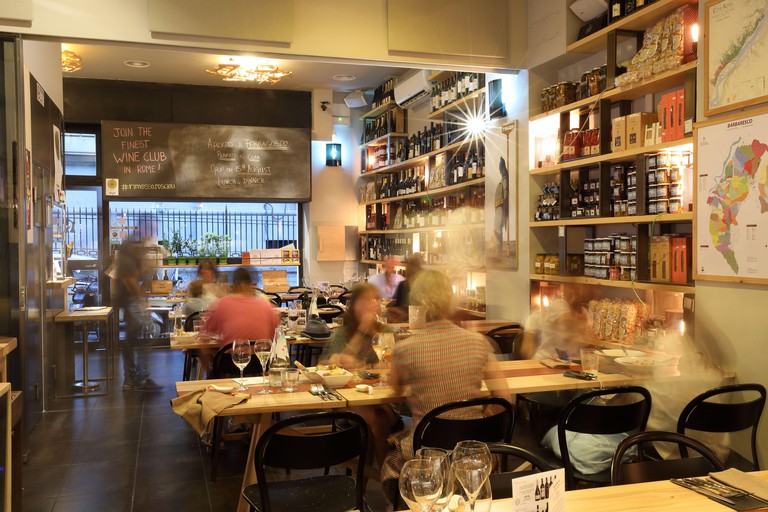 Onwards to pasta! A perfect carbonara is the cherry on top of a perfect experience in the city. This creamy egg-based sauce is dotted with pieces of succulent guanciale (cured pork jowl) and a healthy dash of black pepper to balance the flavours. Roscioli is renowned for preparing one of the best versions of this dish inside its trendy deli-restaurant atmosphere.

Amatriciana is another favourite: this tomato-based pasta also features crispy guanciale (cured pork jowl) and is typically served with bucatini noodles, which are like thicker spaghetti, but hollow in the middle. Be careful, because you can make a mess slurping up the deliciousness of this dish – at Da Bucatino you’ll be handed a stylish bib to avoid any accidents! 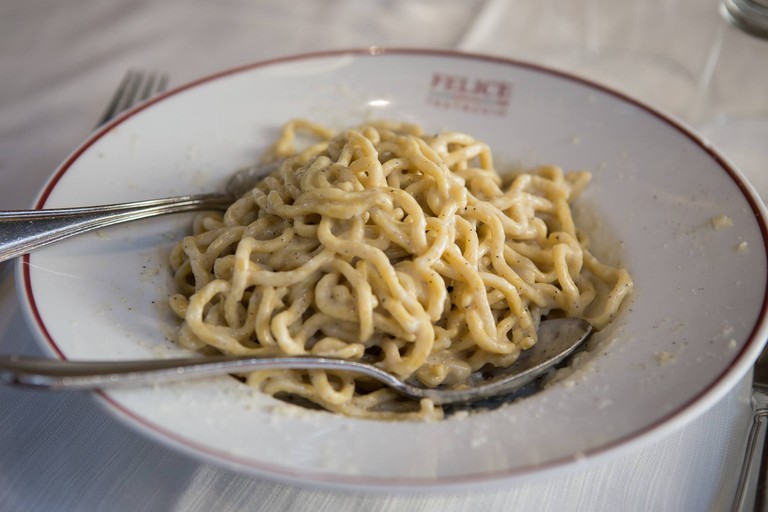 Vegetarians will be pleased to see cacio e pepe on almost every menu in the city. Despite being exceedingly simple and only featuring two ingredients, this dish really packs a punch. Hand-rolled tonnarelli noodles are topped with salty pecorino cheese, plenty of black pepper and whisked with pasta water to create a mouthwateringly creamy, cheesy and mildly spicy sauce. Da Felice makes one of the most famous renditions of this dish, with the waiters adeptly mixing up the noodles at your table.

Aptly named “jump in your mouth”, this typical secondo (main dish) is juicy and delicious. Hearty slices of veal are topped with prosciutto crudo and fresh sage, then marinated with white wine. Saltimbocca alla romana is classic Roman cooking at its best – simple yet succulent. Order it at Da Teo, a charming ivy-clad trattoria in Trastevere.

An ox-tail stew might not immediately appeal to the faint of heart (or stomach), but Roman cuisine has its roots in “poor man’s food” and is is well known for its creative uses of offal. Affectionately referred to as the quinto quarto, workers at the city’s enormous slaughterhouse in Testaccio were often compensated with these extra bits, tasking them to come up with flavourful solutions. Coda alla vaccinara is a rich tomato-based stew that incorporates vegetables, pancetta, a dash of red wine and cinnamon to create a comforting dish. If you’re feeling brave, a good place to try it is at Flavio al Velavevodetto, a restaurant in the Testaccio neighbourhood that prepares excellent classic dishes.

Tripe (cow stomach) is another member of the quinto quarto family that makes many an appearance on traditional menus in Rome. Trippa alla romana is another dish that originated in the Testaccio neighbourhood: it is prepared by simmering the tripe in a flavourful tomato sauce and topped with fresh mint and pecorino. Try this concoction in sandwich form at Mordi e Vai, an old-school panino spot at the Testaccio Market that serves up flavour-packed sandwiches to long lines of hungry locals each day. 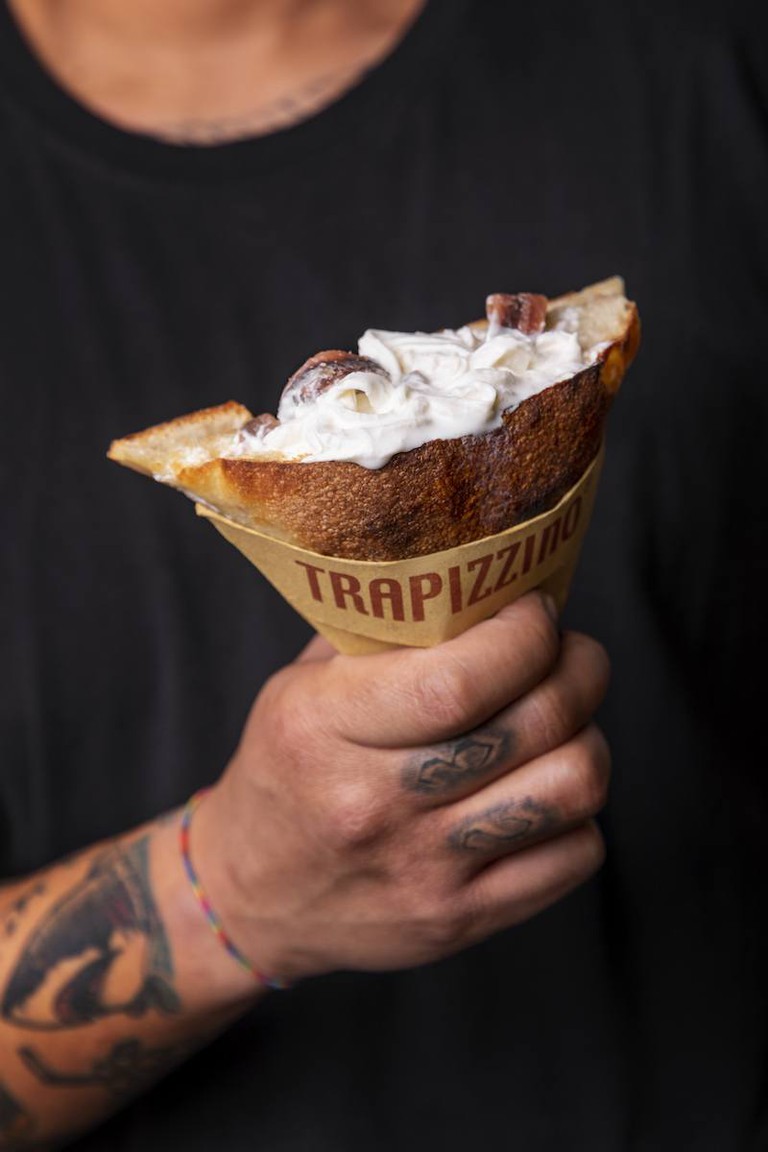 A more modern interpretation of sandwiches can be found at Trapizzino, where they serve a fluffy pizza pocket stuffed with lip-smacking concoctions such as eggplant parmesan or chicken with red pepper. Truly unique and incredibly tasty, Trapizzino is making its way abroad and has opened locations in Tokyo and New York. Try the original in Testaccio, though there are multiple locations in the city. 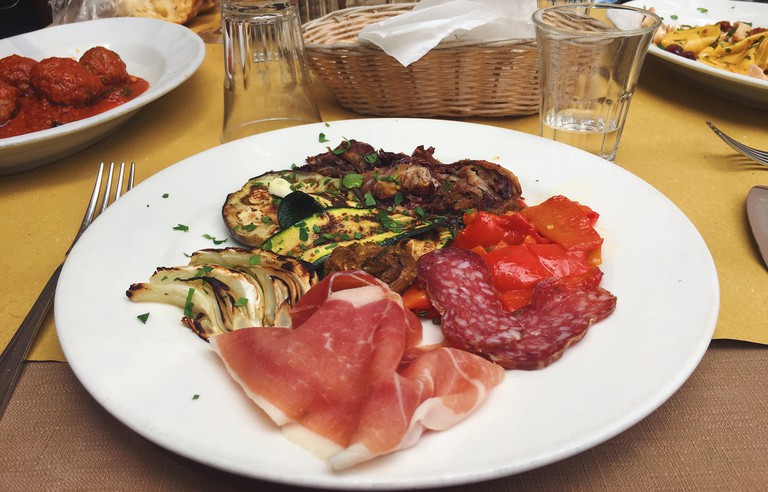 Leafy greens may not sound particularly appealing or noteworthy, but Italians are masters at preparing vegetables. Hence, even lowly chicory becomes a shining element at the Roman table. Sautéed with oil, garlic and crushed red pepper, cicoria is tangy, bitter and satisfyingly savoury. You’ll find it everywhere, but it is particularly delicious at Zi Umberto. 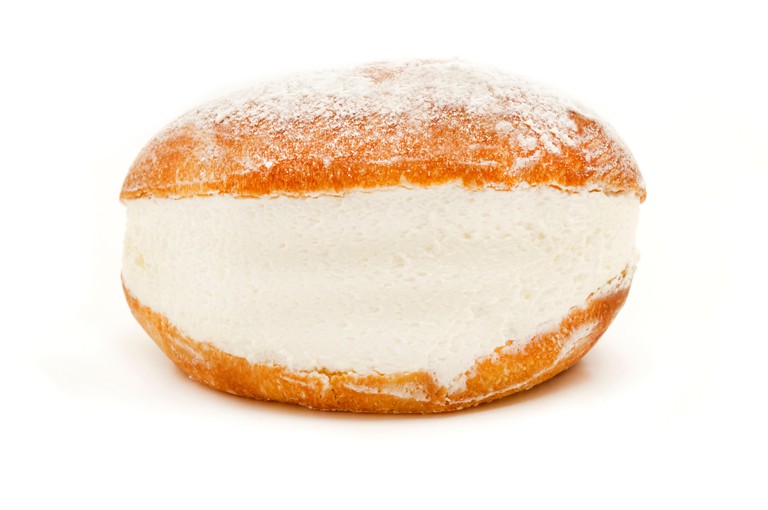 Breakfast in Italy often consists of a cappuccino and a pastry, which tends to vary by region. In Rome, alongside cornetti (croissants) of various types, you’ll also find the improbable maritozzo: a sweet bread roll filled with whipped cream. It is a sure-fire way to start your day with a healthy dose of calories to spur your sightseeing marathon. 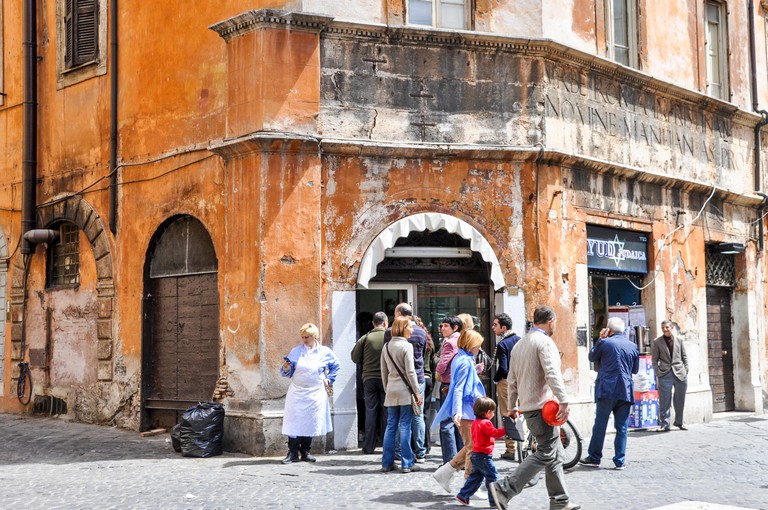 Italians love to finish a meal with a tart like they often eat at grandma’s house. Although not ubiquitous in the city, you’ll find this dessert on many menus in the Jewish Ghetto and at pastry shops. It has ricotta cheese and visciole (sour cherry), two flavours that complement each other and call to mind a blueberry cheesecake. Grab a slice at Pasticceria Boccione, a no-frills pastry shop in the Jewish Quarter.

10 Artworks By Leonardo Da Vinci You Should Know