Delve into the world of German cuisine and you will soon discover an array of rich, hearty, and delicious dishes that are great comfort food. While each region of Germany has its own specialty dishes and traditional cuisine, there are certain culinary delights that people cherish throughout the country.

Because many of these are easy to make, you won’t find it too difficult to incorporate them into your weekly meal plan. So why not explore German culture with your tastebuds and create your own dishes using these handy recipes. Guten Appetit! 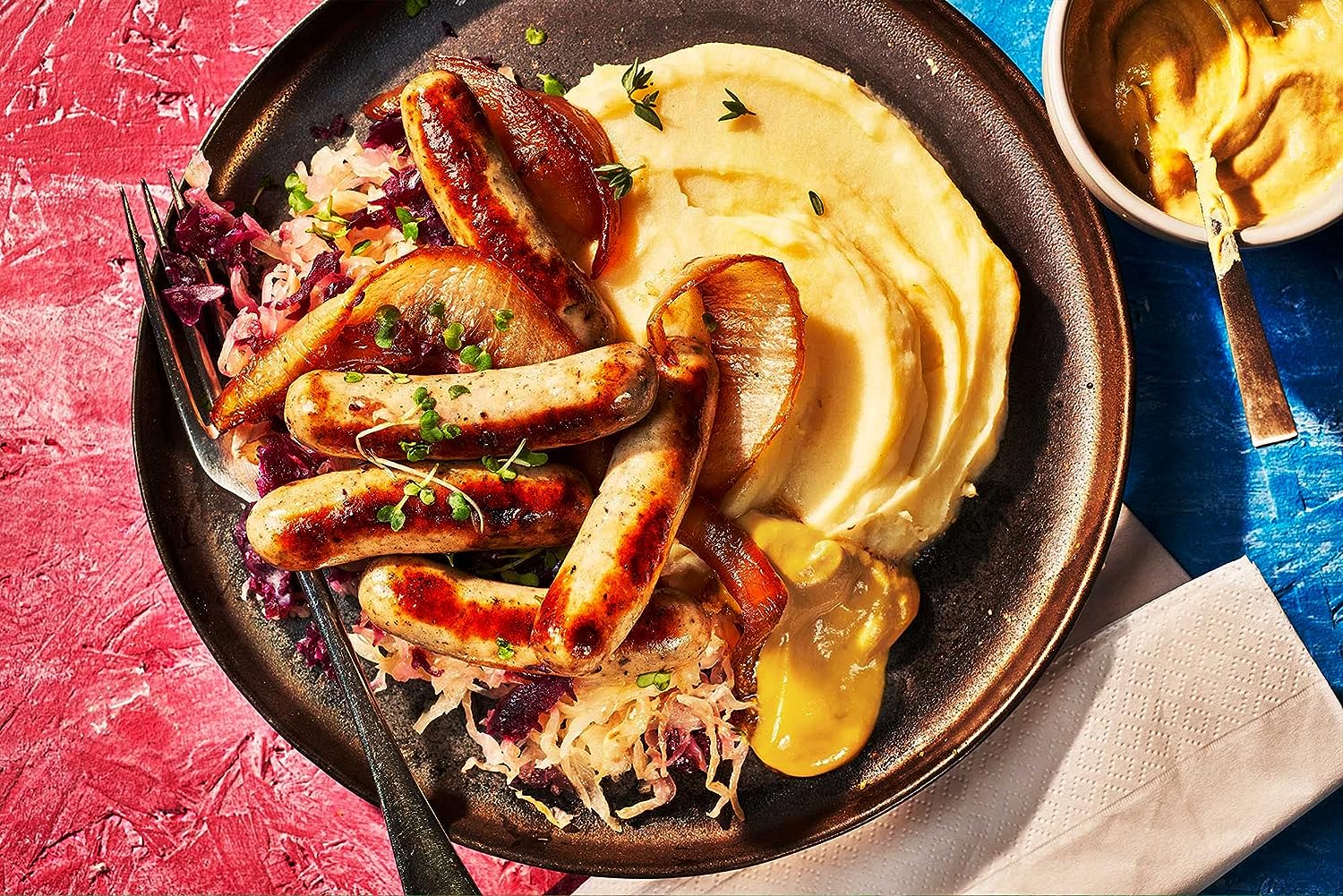 Let’s start with an obvious one – Wurst. There are an estimated 1,500 varieties of sausage in Germany; each with their own preparation, ingredients, and unique blends of spices. You will find these on street stalls almost everywhere across the country. One of the most popular varieties is Bratwurst, a pan-fried or roasted sausage made from veal, beef, or pork. Others include Wiener (Viennese), which is smoked and then boiled, and the blood sausages, Blutwurst and Schwarzwurst. You will also find regional specialties such as Berlin’s Currywurst (with curried ketchup on top) and Bavaria’s Weisswurst; a white sausage that you peel before eating with sweet mustard. Meanwhile, Nuremberg is famous for its grilled Rostbratwurst, which people eat with fermented shredded cabbage (sauerkraut). And in the state of Thuringian, the local Rostbratwurst is made using distinctive spices, such as marjoram and caraway.

This typical German dish consists of bacon, onions, mustard, and pickles wrapped in thinly sliced beef or veal which is then cooked. Rouladen is also considered to be part of traditional Polish cuisine in the Upper Silesia region. Here it is known as rolada Śląska (Silesian roulade). It is also famous in the Czech Republic where it is called Španělský ptáček (Spanish bird). While the mixture varies from region to region, beef has become popular over the last century. The cut is usually topside beef or silverside since this is the cheaper cut. You will find this hearty German food at festivals and family dinner tables across the country. It usually comes with dumplings, mashed potatoes, Blaukraut (cooked red cabbage), and red wine gravy.

Germany’s answer to pasta, Spätzle is especially popular in the south of the country. These soft egg noodles are made from wheat flour and egg and are often topped with cheese (Käsespätzle) and roasted onions. Although the origin of the dish is disputed and variations are found in neighboring countries, Spätzle remains a Swabian specialty. There, the general cooking rule is to use one more egg than the number of guests. Spätzle is often served with meat dishes that use a lot of sauce or gravy, such as Rouladen, or in stews, such as Gaisburger Marsch (a Swabian stew). In some regions, the dough contains other ingredients like cherries (Kirschspätzle), apples (Apfelspätzle), liver (Leberspätzle), sauerkraut (Krautspätzle), or even beer.

A steaming bowl of Eintopf will warm anyone up on a cold day. The name of this traditional German stew literally means ‘one pot’ and refers to the way of cooking rather than its contents. That said, most recipes contain the same basic ingredients: broth, vegetables, potatoes or pulses, and pork, beef, chicken, or fish. Eintopf is similar to Irish stew and you will find many different regional specialties throughout Germany. These include Lumpen und Flöh (which means ‘rags and fleas’) in the Kassel area and Linseneintopf (lentils) in Thüringen. Full of flavor and heart-warming goodness, it’s no wonder this tasty dish is one of the most popular German foods.

Germans love their meat dishes, and Sauerbraten (meaning ‘sour’ or ‘pickled’ roast) is one of the country’s national dishes. You can make a pot roast by using many different types of meat, which you marinate in wine, vinegar, spices, herbs, and then season for up to ten days. This recipe is also ideal for tenderizing cheap cuts of meat. Schweinebraten (which translates as ‘roast pork’) is a delicious Bavarian recipe that you will commonly find in beer halls. It usually comes with braised cabbage or Sauerkraut and dumplings (Knoedel) and goes down nicely with an ice-cold pilsner.

What a fantastic word! Perfect to enjoy as either a side dish or a light snack, Kartoffelpuffer are shallow pan-fried pancakes made from grated or ground potatoes mixed with flour, egg, onion, and seasoning. You can top them with a variety of sweet or savory condiments, such as sour cream, cottage cheese, apple sauce, or cinnamon. You will often find this tasty German food at outdoor markets in the winter and some variations use sweet potatoes which are also popular. 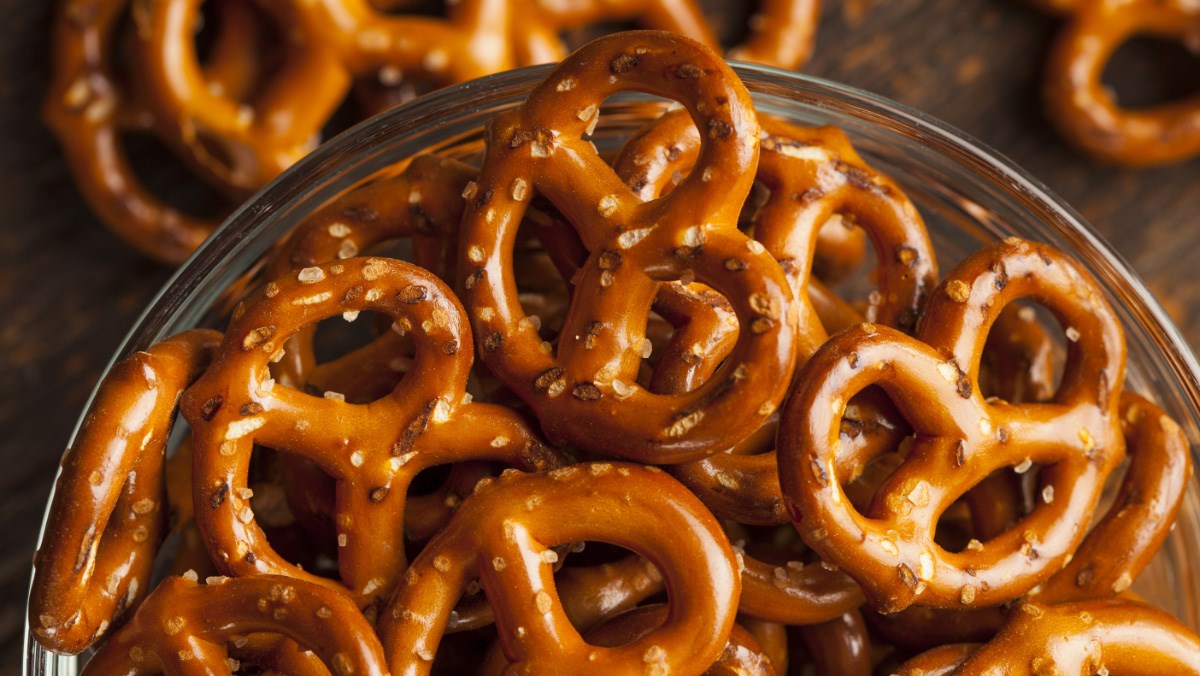 Great to eat as a side dish or snack, the Brezel (pretzel) is a type of baked pastry that is made from dough commonly shaped into a knot. A Brezel is usually sprinkled with salt, however, other seasonings include cheese, sugar, chocolate, cinnamon, and different seeds. This is a popular German food to eat with German beer and you will find it in bakeries and on street stalls throughout the country. They usually come plain, sliced, and buttered (Butterbrezel) or with slices of cold meats or cheese. Lecker!

Our list of top German foods wouldn’t be complete with mentioning Schnitzel. Coated in breadcrumbs and often served with a slice of lemon, this thin, boneless cutlet of meat is an iconic part of German cuisine. You can choose a Wiener Schnitzel (Viennese style) made from veal, or a Schnitzel Wiener Art, with pork (Schwein). If you order a Hamburg-style schnitzel, it will arrive with a fried egg on top, while a Holsten-style schnitzel comes with an egg, anchovies, and capers.

You’ll find lots of cakes and tarts to tempt you in Germany, but few people can resist a huge slice of Germany’s most famous cake: the delicious Schwarzwälder Kirschtorte (which literally means ‘Black Forest cherry torte’). This dessert gets its name from Schwarzwälder Kirschwasser, a liqueur distilled from tart cherries. Interestingly, German law actually mandates that Kirschwasser must be present in the cake for it to be labeled a Schwarzwälder Kirschtorte. Alternating layers of rich chocolate cake, cherries, and whipped cream are topped off with more cream, maraschino cherries, and chocolate shavings for a luxurious finish.

Although Apfelstrudel (apple strudel) is one of Austria’s national desserts, Germany has also adopted it into its local cuisine. The popular dish consists of buttery pastry filled with apples that are flavored with sugar, cinnamon, and raisins. The dish became popular in the 18th century under the Habsburg empire. You can make the delicate flakey pastry from an elastic dough, which you knead and stretch until it is almost paper-thin. You then butter the thin pastry layers together, before wrapping them around the apple filling and baking it. It is common to eat the dessert in slices with a sprinkling of powdered or icing sugar. Simply heavenly!

6 Places To Discover Germany At Its Breathtakingly Best

The History Of The Berlin TV Tower In 1 Minute

5 Enchanted Places In Germany Straight Out Of Fairytales