Italy is not short of pretty villages, impressive architecture and sublime artwork, but San Gimignano ticks all the boxes and then some. Wine and art lovers both flock to this small hilltop town, about 35mi (56km) south of Florence, coming for the astonishing array of medieval frescoes and staying for the fine vernaccia di San Gimignano white wine (according to High Renaissance maestro Michelangelo, this wine “kisses, leaks, bites, pricks and stings” – make of that what you will). Famed for its 14 handsome towers, narrow winding streets and wide piazzas (squares), there are countless things to see and do in San Gimignano. Here are the top eight reasons why you should visit. 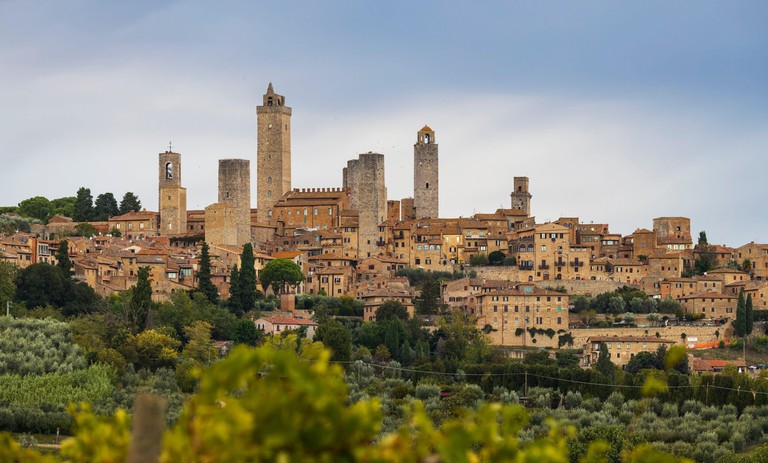 No matter which direction you approach San Gimignano from, you can’t help but be impressed by its unique skyline of tall stone towers – like a medieval version of city skyscrapers. The defensive walls built in the 10th and 13th centuries encircle some of the finest examples of towers, noble palaces, late Roman churches and fresco artwork found in the region. Being declared a Unesco World Heritage site in 1990 didn’t exactly dissuade the hordes of tourists, but the historic centre remains unspoilt by the 3 million visitors who come here every year.

Back in the 13th and 14th centuries, the way to flaunt your wealth was to build a tower that was bigger and better than anyone else’s. The two main tower tyrants were the power-hungry families of Ardinghelli and Salvucci, intent on outdoing each other time and again. Eventually, in 1255, the city council put a stop to such flagrant braggadocio and the tower building ceased. Sadly, of the 72 medieval towers that once stood in this Manhattan of the Middle Ages, only 14 remain – still standing the test of time as symbols of ancient power.

For the ancient history 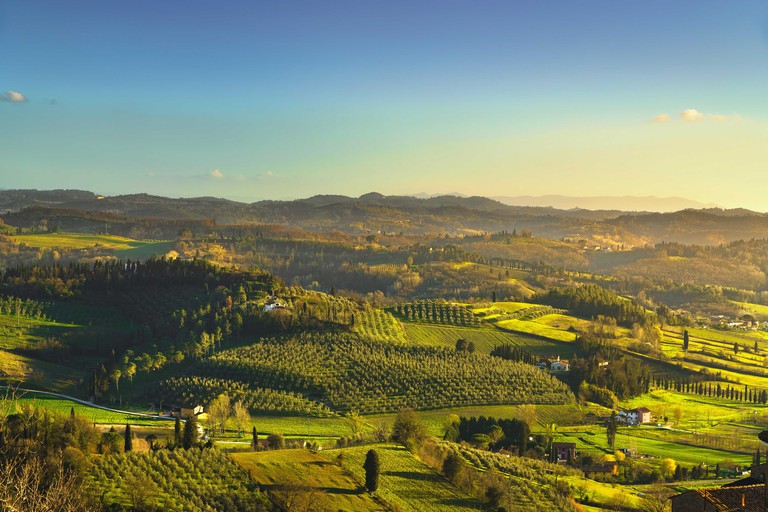 Originally founded by the Etruscans in the 3rd century BCE, this small hilltop village became a stopping point for Catholic pilgrims on the Via Francigena, a system of paths running over 1,000mi (1,609km) from Canterbury to Rome. Its strategic position allowed merchants to garner great wealth from the saffron fields and vernaccia vineyards, whose wine was said to inspire poets and popes with its distinctive taste. The year 1199 brought independence, but also inner conflict and the tower building rush of competitive families. The Black Death brought an end to the rise of the town, but happily much of what was built remains intact today.

For the impressive views across the Tuscan hills

San Gimignano stands out from the landscape with the kind of robust beauty that lures you in from afar. It was originally surrounded by woodland, but you’ll now find the hilltop town circled only by saffron fields and gently undulating countryside interspersed with cypress trees and vineyards. Small stone buildings dot the landscape, completing a picture-perfect scene of classic Tuscan beauty. Climb the 218 steps to the top of the Torre Grossa for the best panorama in town.

It’s a great place for getting lost 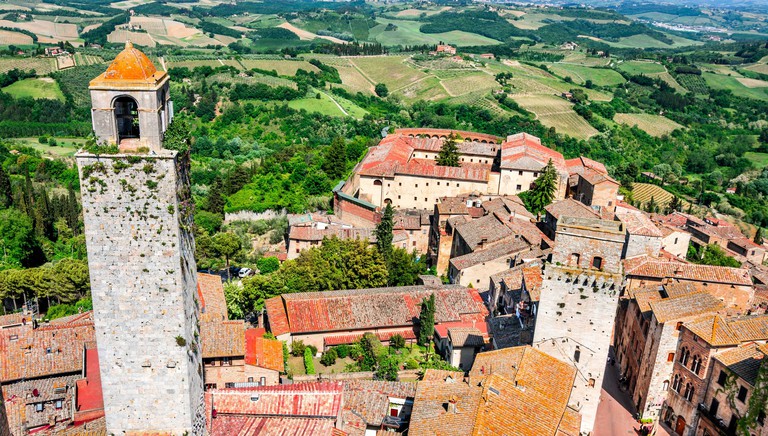 One of the many good things you can count on getting in Italy is a delicious gelato. And San Gimignano doesn’t disappoint, with queues starting early for the gelateria in Piazza Cisterna. Take your pistachio ice cream and saunter the winding streets, perusing the many souvenir shops that sell everything from artisan pottery to postcards of your favourite Catholic saint. Staying overnight here is a special treat, giving you enough time to relish the medieval beauty of this town as the sun dips, casting golden light over its ancient stones.

Think of Tuscany and you’ll probably think of wine. But it’s not only sangiovese-based dry reds that hail from those sun-drenched vineyards. Vernaccia di San Gimignano was the first white wine to earn the honour of a DOCG designation, in 1993. This fine, light straw-coloured wine makes a delightful aperitivo and also pairs perfectly with seafood and white meat. Try to take time to taste this dry, distinctive wine with a local mushroom or seafood risotto, to maximise its full, intense flavour. 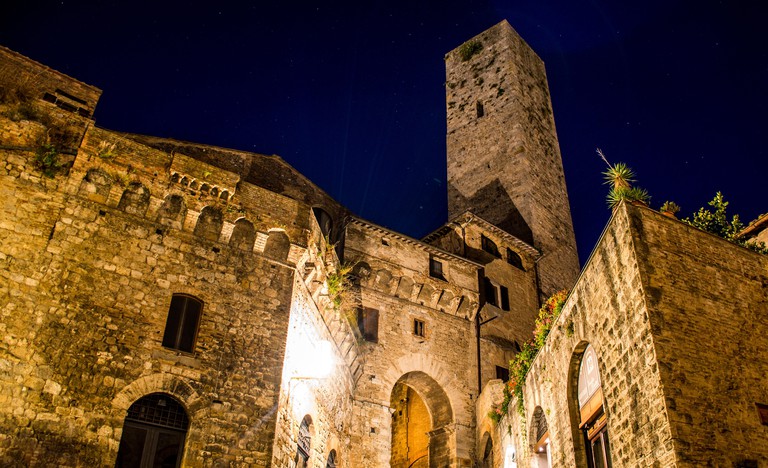 Although rather plain, bare and squat on the outside, you shouldn’t judge this cathedral by its cover. The Romanesque building houses some of the most lavish interior frescoes in Tuscany, including some by master Renaissance painter Ghirlandaio. Because of the fine quality of the artwork, the cathedral was a major stopping point for olden-day Catholic pilgrims walking the Via Francigena (the road from Canterbury, England, to Rome). The many steps leading up from the piazza must have been an insult to road-weary legs, but the glory of the treasure inside was, and is, worth every step. 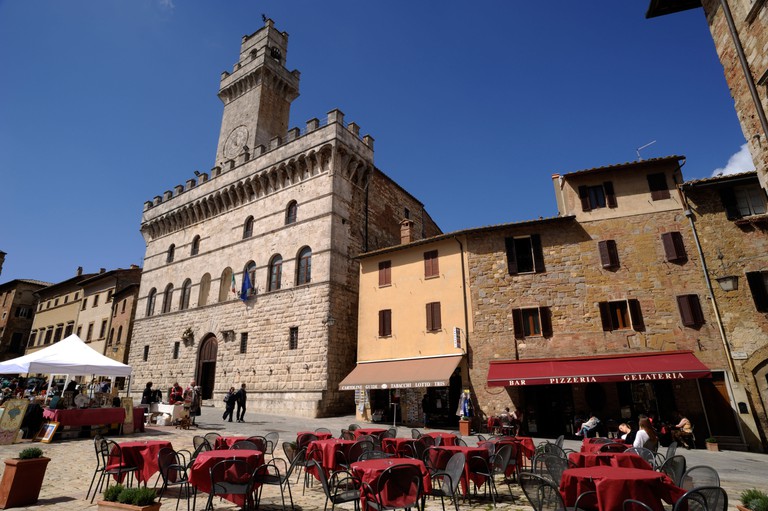 Once the home of the mayor and the meeting place of the town council, this 13th-century building now bursts at the seams with 13th- and 14th-century artwork and frescoes from the Florentine School. But it’s not only the artwork that’s worth making the trip for. The tallest of the medieval towers of San Gimignano, the Torre Grossa, is accessed from here, offering unparalleled views over the town and the pretty Tuscan countryside beyond.

11 Scams All Tourists Should Avoid in Italy